News from Georgia: 26 May

The Bolsheviks have been preparing for this day. They were afraid of people’s uprising. They have sent out circular letters (N374), which ordered to take the strictest possible measures against spontaneous demonstrations. In case such were to happen, all militiamen and all communists were permitted to use their weapons.

The Bolsheviks have tried to celebrate 26 May [Georgia’s Independence Day, proclaimed in 1918 – eds.], as the day’s of Georgia’s liberation, but beforehand they have abolished Georgia’s flag and coat-of-arms, replacing them with the Russian red flag with the hammer and sickle.

People did not accept these changes, they refused to participate. Especially, since many feared the Bolshevik provocation and bloodshed. In cities – Tbilisi, Kutaisi, Batumi – the Bolshevik May 26 turned into a farce, a staged event. Only profiteers and bureaucrats, who were ordered to attend, came out. In Tbilisi, Georgians did not come out at all.

On the same date, the unveiling of the bust of [Shota] Rustaveli was scheduled [the monument of the early medieval poet was erected at today’s Blue Gallery, on Rustaveli ave. – eds.], but hardly 100 people turned up. They half-heartedly listened to the oration of Pilipe Makharadze [head of Soviet Georgian Bolshevik Revolutionary Committee], while they met the national anthem “Dideba” [which remained the only symbol of the Georgian Democratic Republic that remained unchanged. The Soviet Union did not get its anthem until 1943. From 1922 to 1943 “The International” was used. – eds.] – which the choir was allowed to sing – with an ovation, listened to it with their heads uncovered and demanding the choir to repeat it thrice. This was an open demonstration of the boycott.

In the villages, some people attended the Communist rallies, mostly out of curiosity. In some places, people tried to rally with the Georgian [national] flags.

Such was the demonstration in Ozurgeti, where 8 villages came together for the rally with the national flags. The communists tried to confiscate them, but were taken aback by the people’s resistance and gave them back. Social Democrat Giorgi Murvanidze [member of the Constituent Assembly, former mayor of Ozurgeti[ spoke and was interrupted by ovations and covered in flowers. Result – Murvanidze and upto 15 others were detained [on 5 June – eds.]

In Lanchkhuti, people have disarmed the [Bolshevik] militia beforehand, to avoid the incidents, and gave them back their arms after the rally, which was full of the Georgian flags.

Similar events unfolded in Sighnaghi – local Social-Democrats brought out the Georgian flag and transformed the Bolshevik celebration into the Georgian one. As a result, many activists were detained here, too.

People vividly said, that they believe in May [celebrations], but they do not believe in Bolsheviks.

The failure of the Bolshevik party to appropriate the 26 May celebrations in 1921 was a the breaking point. It has effectively ended the initial, “soft” period of occupation. Public boycott and, at times, open resistance has convinced the communist leadership that stricter measures needed to be taken. Several of the rallies in the regions, which carried Georgian flags were broken up by the army, several people were killed in confrontations. Massive arrests followed, especially of the Social Democratic party activists and the members of the Constituent Assembly. From 1922 celebrations of the 26 May were abolished. The date of 25 February – the day when the Soviet Russian Army entered Tbilisi was pronounced the “Day of Georgia’s True Independence”. By the end of the same year, talks of Georgia’s “independence” have ended conclusively – Soviet Georgian Socialist Republic was abolished and merged into “The Transcaucasian Soviet Federative Socialist Republic”, which existed till 1936. 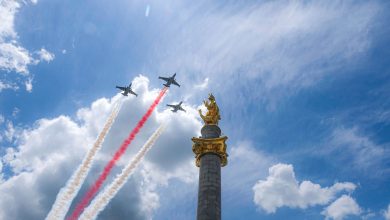 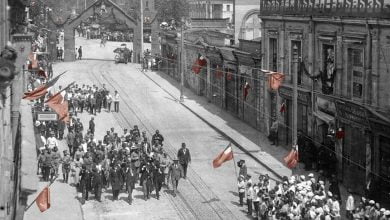