Some 2,000 workers of the Rustavi Azoti, a major Georgian manufacturer of mineral fertilizers, have come to an agreement with company leadership on pay raises, ending a week-long strike demanding “human working conditions” and a long-promised salary increase.

Despite agreeing to the said pay raises, offered on May 1, some workers were left dissatisfied, highlighting that the increases fell short of the demanded 50% and the terms did not include indexation.

However, the firm has apparently agreed to create a group to work on further improving contract terms, and to review the pay rates of independent contractors, piece-rate workers, and employees with a monthly salary higher than GEL 1,500.

The week-long strike was marked with the workers and the company trading accusations. The employees argued the firm’s leadership was pressuring and threatening their fellow co-workers. Meanwhile, following a failed negotiation attempt on April 28, the Rustavi Azoti warned against hindering day-to-day work processes, dubbing it “sabotage,” a crime punishable in accordance with the Criminal Code of Georgia.

Rustavi Azoti workers have been grabbing the headlines over recent years. In January 2017, the new leadership of the company dismissed around 350 workers, prompting street protests in both Rustavi and Tbilisi, the capital. In 2018, 56 of them reportedly won the case in Rustavi Court, which ordered the company to reinstate the employees. 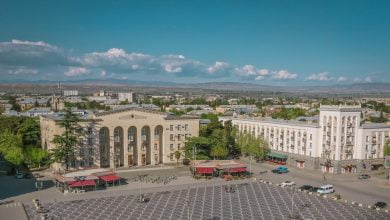