The poll, released on August 12, was coordinated by Baltic Surveys/The Gallup Organization for the International Republican Institute (IRI) and the fieldwork was carried out by Institute of Polling and Marketing in a period between June 4 and July 2 through face-to-face interviews with 1,500 respondents and has a margin of error of plus/minus 2.5. The survey was funded by the US Agency for International Development.

According to the part of the public opinion survey, which examines voting intentions of respondents if parliamentary polls were held this Sunday, the ruling Georgian Dream-Democratic Georgia (GDDG) has 33% support among respondents (23% in October’19), followed by its arch-nemesis former ruling party of the United National Movement (UNM) with 16% (15% in Oct’19); European Georgia – Free Democrats trail far in the third place with 5% (7% in Oct’19); New Georgia/Strategy Aghmashenebeli of Giorgi Vashadze and Alliance of Patriots have the support of 3%. Labor party, Civic Movement of Alexander Elisashvili, Lelo for Georgia, and Girchi each would receive 2%.

Noteworthy, that 17% said they don’t know who they would vote for, while 11% refused to answer. 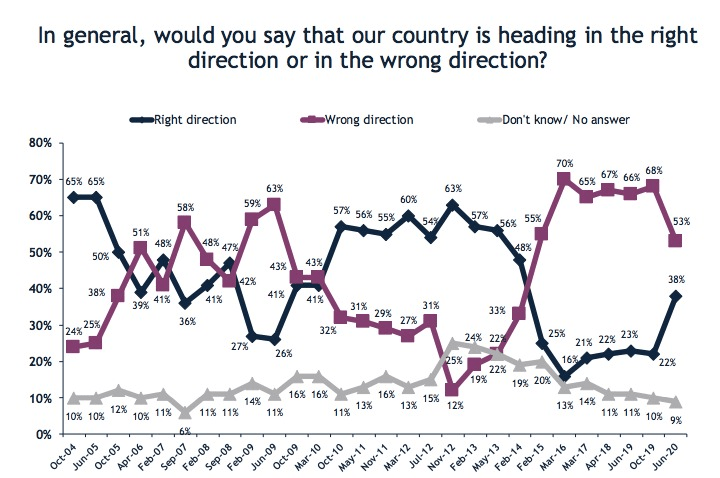 Responding to the question “which parties, if any, would you not vote for under any circumstances” – respondents could select multiple answers – 29% said UNM, 25% – Georgian Dream, Girchi – 16%, Alliance of Patriots – 12%, Labor Party – 9%, For Justice of MP Eka Beselia – 9%, Democratic Movement United Georgia of former Parliament Speaker Nino Burjanadze – 9%, European Georgia – 7%.

Favorable/unfavorable Ratings of the Leaders

Zurab Girchi Japaridze, MP Eka Beselia, and ex-speaker Nino Burjanadze are the most unfavorable for respondents, with 73%, 72%, and 66%, respectively.

Russia remains to be the main foe in the eyes of Georgians, with 84% considering Georgia’s relations with its northern neighbor as bad, while 6% evaluate Russo-Georgian relations as good. 82% of respondents see Russia as the greatest political threat, while 70% named it as the greatest economic threat to Georgia.

72% of respondents said Russian aggression toward Georgia is still going on, 18% noted that it is over but likely to resume. 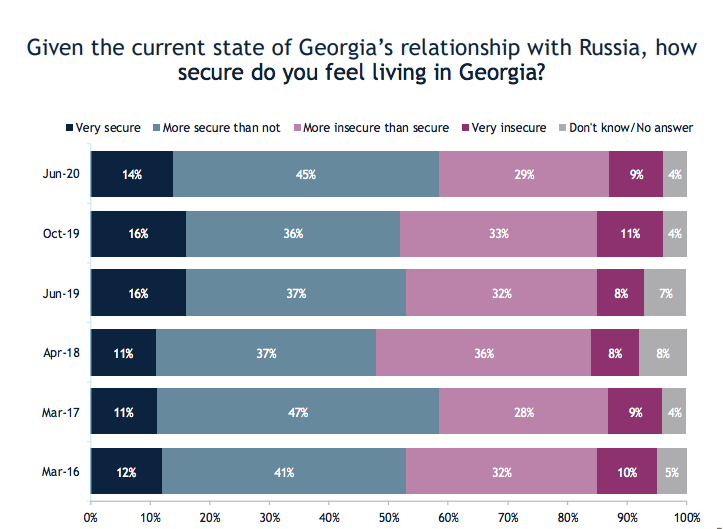 As for the Georgian Dream administration’s handling of relations with Russia, 23% of Georgians see it ‘very negatively,’ 29% see it as “somewhat negatively,” while 6% and 33% regard it as “very positively” and “somewhat positively”, respectfully.40% of Georgians fully support further dialogue with Russia (down from 83% in November 2012 and from 48% in October 2019); 35% somewhat supports it; 8% and 14% opposes to it somewhat and strongly, respectively. 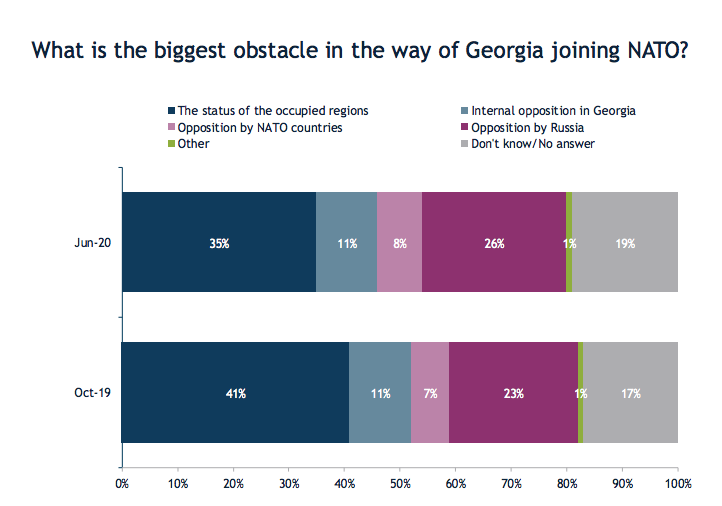 Support for EU membership is higher, with 64% (5% up since Oct 2019) fully backing Georgia’s bid to enter the 27-member bloc, while 23% somewhat supporting it. 43% said a strengthened economy is the main benefit of joining the EU.

25% of the surveyed persons say the fight against coronavirus is the main accomplishment for the Georgian Dream-led government; 7% regards healthcare reform as GD’s main achievement during its 8-year-long tenure, followed by freedom of speech – 3%. 15% say GD administration has no achievement, while 32% don’t know or refuse to answer.

Georgian army tops the list of most favored institutions with 89%; the Georgian Orthodox Church comes the second with 85% having favorable and 11% having an unfavorable opinion about it. Georgian media is the third with 71% favorability. Courts, governors, and trade unions have the least “favorability” with 32%, 30%, and 25%, respectively. The President’s Office is the most unfavored institution with 61%. 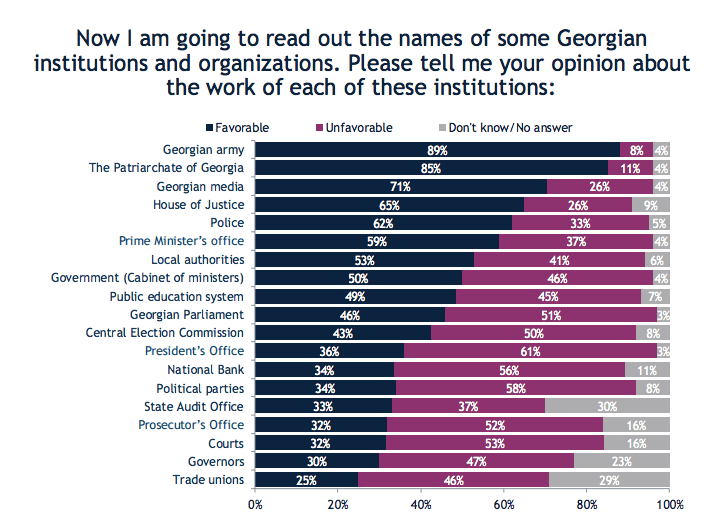