National Democratic Institute (NDI) released the second part of the results of its public opinion survey, showing respondents’ attitudes towards broad range of issues, among them party support, trust towards various institutions and assessments of government performance.

The survey was fielded by the Caucasus Resource Research Centers (CRRC) for NDI between July 13 and July 29 with the financial assistance of the UK Aid, and was carried out through nationwide face-to-face interviews (excluding occupied territories) with 2,131 respondents and has an average margin of error plus, minus 1.7%.

According to the survey, the Georgian Dream-Democratic Georgia (GDDG) enjoys the strongest public support with 19% of respondents identifying GDDG as “the party closest” to them against 21% and 27% of respondents in the April 2019 and December 2018 surveys, respectively.

45% of respondents said that none of the parties is closest to them, an eight percent increase compared to the April 2019 survey. 6% of respondents noted that they do not support any party and 4% refused to answer.

Asked which party they would vote for if parliamentary elections were held tomorrow, 20% of likely voters named Georgian Dream (the same number as in the April 2019 survey); 9% – UNM (15% in April 2019); 4% – European Georgia and 4% – Alliance of Patriots (the both parties enjoyed the same support in April 2019); 19% of respondents responded “no party;” 9% responded “other parties” and the same number of respondents refused to answer.

The respondents named the Parliament (42%), courts (37%) and Prosecutor’s Office (27%) as the lowest performing national institutions. They enjoy 8%, 10%, and 12% positive evaluations, respectively.

According to the survey, the vast majority of Georgians (92%) are aware of the demonstrations on June 20, and asked “who do you think is primarily responsible for the violence that occurred on June 20?” 55% raise the primary responsibility on government agencies in general, including the government – 43%; then Interior Minister Gakharia – 9% and the Ministry of Internal Affairs and police – 1% each. 8% of citizens blame UNM, 4% – Bidzina Ivanishvili, while 2% blame protestors. 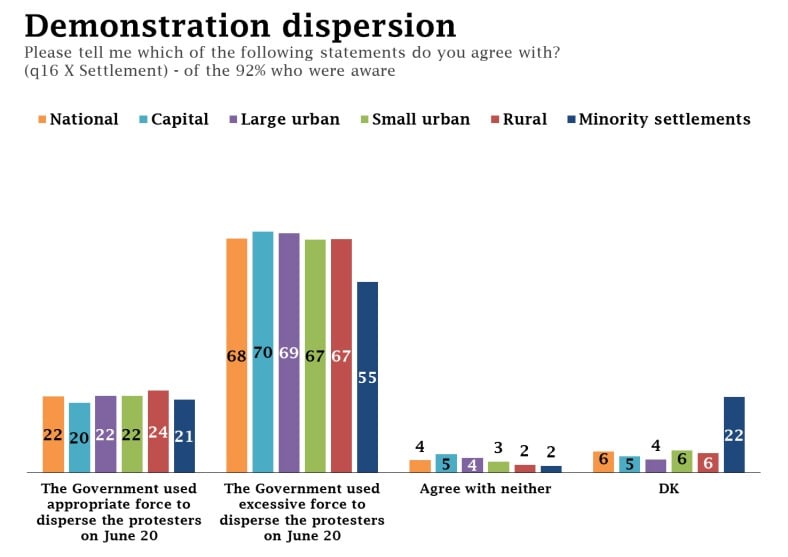 The survey also involved the question about the key demands of the June protests, among others holding fully proportional elections in 2020 and resignation of then Interior Minister Giorgi Gakharia.

68% of respondents said that they were aware that the ruling party agreed to hold the 2020 parliamentary elections with proportional system. 85% of respondents approved this decision. As for Gakharia’s resignation, 46% of those respondents who are aware of the June 20 developments, agreed with the demand and 39% – disagreed.

59% of respondents evaluated the government’s response to the June 20 developments and following protests negatively and 23% – positively. 18% said, they do not know how to evaluate and 1% refused to answer.

Respondents were asked whether they were aware of Russia’s ban on direct flights with Georgia in response to the June 20 developments.

NDI released the first part of its opinion survey on September 17.