Two main contenders – Vladimer Kakhadze of the ruling Georgian Dream party and Shalva Shavgulidze of European Georgia – Free Democrats will face off in the second round of elections on May 9, garnering 41.01% and 36.84% of votes, respectively, in the first round.

Ahead of the second round of the polls, it remained to be seen whether Shavgulidze would emerge as the unified candidate for the opposition, with opponents of the ruling Georgian Dream throwing their weight behind him.

The United National Movement (UNM) stayed true to the electoral alliance with the European Georgia struck ahead of the first round of polls. UNM did not run the candidate in Mtatsminda and re-stated its position to support Shavgulidze. Georgia’s ex-President Mikheil Saakashvili personally called on teammates and supporters to back the opposition candidate in the second round.

Other opposition candidates, however, decided to stay clear of backing either of the run-off contenders.

On May 29, Levan Ioseliani, former independent candidate in Mtatsminda constituency, who came the distant third with 6.55% (964 votes) in the first round of elections, stated that he would not support any candidate in the second round. He claimed to have taken this decision after consulting his voters.

“Despite my personal respect [to Shavgulidze], they [voters] deem the political choice which he made, linking his future to European Georgia, unacceptable,” Ioseliani said.

Another independent candidate, Sophio Khorguani also does not intend to support any candidate in the second round of elections. She garnered 2.64% of votes (388 votes) in the first round.

Khorguani told Civil.ge that she does not belong to the Mtatsminda constituency herself, but called on voters to participate in the elections. According to her, two negative factors which transpired during the first round were a “faulty” practice of mobilization of party-backed agitators at precincts and a low voter turnout.

Liebral-minded political Union Girchi fielded Germane Sabo as a candidate; he garnered 4.76% of voters (701 votes) in the first round. Girhi also does not intend to call on its voters to support any candidate in the second round. The party publicly invited Shavgulidze canvass its supporters but, Girchi leaders say, Shavgulidze did not respond to their proposal.

While the personal reasons for their decisions might differ, the choices of the new and independent political players are underpinned by polls, which show the decline of the two arch-rivals – GD and UNM – but also the thinning support for the European Georgia.

According to the public opinion survey released by the U.S. National Democratic Institute (NDI) on May 21, 21% of respondents identify Georgian Dream as “the party closest” to them, compared to the United National Movement’s (UNM’s) 15%.

They are followed by the European Georgia and the Alliance of Patriots with 4% and 3%, respectively. 12% of respondents either refused to answer or said they did not know which party was closest to them. 37% indicated “no party” to the question, and 8% of respondents named other parties. 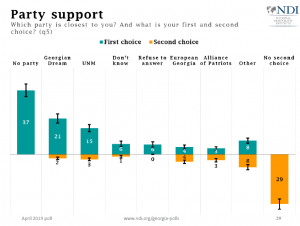 Those refusing to associate themselves with front-runners are likely hoping to tap into those disgruntled 37%. In the meantime, GD maintains its firm grip on power. 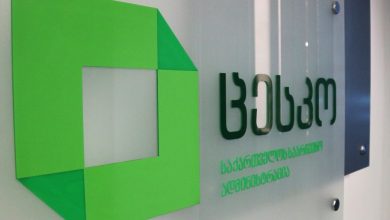 CEC Releases Final Vote Tally of First Round of By-Elections