We have summarized some of the key points for our readers.

Dissent in the ruling party

Ivanishvili spoke at length on the judicial appointments dispute that ended with eight MPs quitting the ruling party. The GD leader noted that the departure of four lawmakers – Levan Gogichaishvili, Eka Beselia, Gedevan Popkhadze and Zviad Kvachantiradze – had “no [real] reasons.”

Ivanishvili stressed the ruling party postponed the appointments process, and signaled that it was ready to deliberate on the selection criteria, as well as on allowing free vote on individual candidates, but the lawmakers “had wanted to leave, and used the process as a pretext.”

Ivanishvili added that this was “an artificially-induced hype,” and that the lawmakers “in essence, were playing the game of the United National Movement.” “For some reasons, they expressed their concerns about the judiciary six years after joining our team; where have the been for all this period of time,” he asked.

Ivanishvili said the processes led to “confusion” among the team members, but added that the dispute is “almost over” following his “multiple and lengthy meetings” with GD members. “There are some minor problems remaining, but they will be solved easily,” he added.

Ivanishvili spoke about the second group of lawmakers – Beka Natsvlishvili, Gia Zhorzholiani, Mirian Tsiklauri and Koba Narchemashvili, all of them members of the Georgian Dream-Social Democrats faction.

The GD leader underlined that their departure is a textbook example of how parties should be split.

“They tried to convince their teammates to endorse their version of the pensions reform… they warned the party several times [that they would leave unless they obtained support], but the team did not manage to come to agreement and they left the party,” Ivanishvili said.

“This is a classic, European version of events, a textbook example of how to quit your team – because you disagree on values and ideology; but how the other group left was absolutely unclear,” he added.

NGOs under opposition control, but courts no longer

Ivanishvili repeated his criticism of the civil society organizations, accusing them of acting under UNM’s instructions in its attempts “to regain control over the judiciary.”

Ivanishvili pointed specifically at the role of Eka Gigauri, executive director of the Transparency International Georgia. Ivanishvili said in 2013 Gigauri, who – in his words – “is portraying herself as an NGO,” was in favor of lifetime appointment of judges, but has changed her position and is now challenging the authorities over the decision.

The GD leader also stressed UNM, with the support of “friendly NGOs,” started pedaling on alleged “clan-based” rule in the judiciary, when the party realized that the judges were becoming independent.

“Over the last five years, our courts have considerably changed; this is a reality and this confirms once again that we have chosen a right path,” he added.

Ivanishvili said the dispute between TBC and the National Bank of Georgia concerning the 2008 transaction is over. “There are no unaddressed questions left, but opponents are trying to capitalize on it,” he noted.

Ivanishvili stressed the disputed transaction was a “gross” violation of Georgian legislation, and that the opposition was voicing concerns not on the transaction itself, but on the fact that it took place 11 years ago.

He then spoke on the Anaklia project, where the TBC Bank founder, Mamuka Khazaradze, is a leading partner.

Ivanishvili stressed the port project is technically very difficult, and financially not attractive for private investors. “[As a rule,] businesses are trying to make profits in five or six years, 10 years at the latest, [but] much more time is needed in this case, so this is not an attractive project,” he noted.

The GD leader added, however, that the authorities would like to see the project completed by private investors, and would continue helping the consortium in the process. “The government is very active and very supportive, be it in fundraising or infrastructure development; we are helping them as much as we can,” he said.

“I hope they will manage [to close the deal on funding]… I will only welcome if they are able to complete the project, as the port is very necessary for our country; this is a serious infrastructural project, and if private businesses fail to implement it, the government will want to [bring it to completion],” Ivanishvili added.

Ivanishvili repeated his criticism of Rustavi 2 TV, a national broadcaster leaning strongly towards the opposition. He said the TV channel propagates lies and biased information.

He also slammed the United National Movement, saying the opposition party is using “false, groundless accusations” against him and the GD government, and is keeping the people under “mental oppression.”

“Our political elite is as poor as our economy… It is our misfortune that the political establishment is so poor it cannot produce a new force; as a result, we still have UNM dominating the opposition spectrum; they have skills, they have a big team, they have their own media and have no decency,” Ivanishvili added.

Like in the previous interviews, Ivanishvili touched upon briefly about his reasons for returning to the helm of the ruling party, as well as his plans for strengthening the “vertical of power.”

Ivanishvili said over the last few months he spent “a lot of time” addressing the problems of party management and team cohesion in the Parliamentary majority. He also said that the situation has changed for the better “considerably,” but added that “the sense of motivation in the team has to be increased further.”

He also said PM Bakhtadze’s cabinet works “effectively.” “There may be some questions about individual ministers, but the Prime Minister is trying his best,” Ivanishvili added.

The GD leader also noted that more efforts need to be channeled to public communications. “We need to do everything possible to return our society to reality… the reality is not as grave as it is felt and perceived,” he said.

For more on GD’s leader’s media engagements, refer to our Tag on Bidzina Ivanishvili. 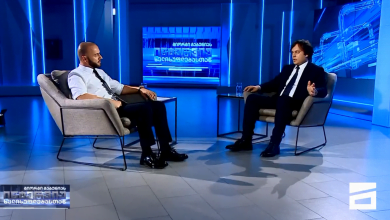