On May 18, Interior Minister Giorgi Gakharia reported to the Parliament at the request of the European Georgia minority group, focusing on May 13 drug raids on Tbilisi’s top music clubs, as well as on reforms planned in the Ministry.

In his 40-minute statement Minister Gakharia stressed the necessity of last Saturday’s drug sweeps and clarified police rationale behind entering the country’s two leading music venues. He also thanked the police officers for ending the operation “without exceeding their authority,” and pledged to have “an appropriate response,” if it was proven otherwise.

Gakharia also clarified that the evidence collected through three month-long investigative measures had “explicitly established that drug sale in clubs had systemic nature.” “We established through covert purchases that specific persons in specific clubs were engaged in drug sale at different times and on multiple occasions, which directly indicated that this was an organized activity,” he noted.

The Minister also specified that the police had documented over 20 episodes of drug sales both in the clubs and in nearby areas, including one involving the head of the security of one of the clubs, “which pointed at systemic ties between drug dealers and clubs.”

“When persons selling drugs are able to enter and exit the club premises bypassing the security requirements, and when these persons are part of the administration, we see this as a systemic problem,” he noted, stressing that the decision to enter the two clubs, “having this evidence at hand,” was justified.

He also reiterated his apology for “causing discomfort to up to 100 people,” but added that it was done “in the public interest,” and that the benefit that it had brought about, was “undoubtedly more significant [than the discomfort caused by it].”

Gakharia spoke about the timing of the operation as well, saying the alternative to entering the clubs at 1 am, “when there were very few people and they were still sober,” was to conduct the operation from six to seven, “when there would be a lot more people and the situation would be much less predictable.” “This was a decision of the investigative team, and we believe that it was absolutely right and justified,” he added.

The Interior Minister reiterated the points in the Q&A session as well, telling the lawmakers that the purpose of the police operation “was not to arrest drug traders, but to establish connection between dealers and the club venues, which would enable us to get to a larger network.”

“Our objective was to determine how the system worked, how clubs were used as a platform for selling synthetic substances,” he pointed out later.

The Minister also rejected the criticism on the use of armed personnel during the raids, saying drug trade was “a grave crime” and that the police did not have “the right not to be ready for any developments.” “The way we have carried out the measure was in the interests of safety of the clubbers … and it was absolutely proportionate [to a potential threat].”

Gakharia spoke on the drug policy as well, saying the legislation “needs to unquestionably be tightened when it comes to drug trade, as well as purchases and possession of drugs in large and extra large quantities.”

“As for the individual use, we are ready to discuss the [appropriate] extent of liberalization, which the country and its economy are ready for,” Minister added.

Minister Gakharia also touched upon the IDAHOT events, stressing the police had “honorably” handled this “huge challenge.” “Although our partner organizations breached every agreement that we had, and instead of assembling at the agreed venue, they chose to organize mini-rallies in various areas, which was a challenge and a provocation in some instances, we [still] managed to ensure their safety and their right to freedom of assembly,” he stated.

Minister Gakharia also previewed his plan for “systemic renewal,” involving a number of structural, functional and legislative reforms in the Interior Ministry. The new plan, that the Minsiter plans to present in detail on May 31, would reportedly see Criminal, Patrol and Border Police reformed, evidence-based policing adopted, and new human resource management practices introduced. 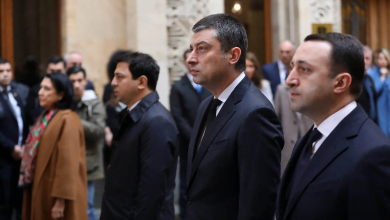