The watchdogs asserted that circumstances surrounding the probe indicated that the Prosecutor’s office “does not act in the interests of investigating the possible systemic crime of the State Security Service, and revealing and punishing the perpetrators.”

The signatories said that the prosecutors have yet to question a number of the victims of the alleged surveillance, all the whole both Prosecutor’s Office and the Court have “groundlessly refused” to grant victim status to any of those already questioned.

Without the victim status, those who were supposedly wiretapped are not able to access information about the investigative process and what kind of results the probe has achieved so far, the watchdogs asserted.

“Despite the high public interest,” the signatories said, the prosecution itself has not disclosed any updates on the probe either, including details about whether they questioned relevant State Security Service representatives.

The watchdogs warned that Unlawful wiretapping is a violation of not only domestic legislation but also Article 8 of the European Convention on Human Rights — the right to private and family life.

Also today, 26 possible victims of wiretapping demanded to meet the prosecutors to be informed about the investigation.

The thousands of the alleged Security Service files on wiretapping were disseminated online and to Georgian media outlets on September 13.

The supposed surveillance was condemned widely by the Georgian opposition, civil society, as well as the country’s international partners.

The reports about the alleged mass wiretapping came about two weeks before the bitterly contested October 2 local elections in Georgia.

A month ahead of the leak, government-critical Mtavari Arkhi TV had aired a report about alleged memos of the SSG which detailed possible spying on phone conversations of President Salome Zurabishvili, presidential and government administration officials, opposition, civil society leaders and others. 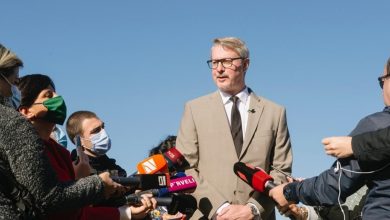