Georgian Deputy Prime Minister and Minister of Foreign Affairs, David Zalkaliani participated today in the NATO Foreign Ministerial, held in Riga, the Latvian capital, where he was invited alongside his Ukrainian counterpart, Dmytro Kuleba.

Speaking with reporters on the doorstep of the Ministerial, FM Zalkaliani said that “it is very important that the role of Georgia, as an aspirant country, be appropriately evaluated,” adding that Alliance should keep prioritizing Black Sea security and the NATO Open Door Policy.

The top Georgian diplomat stressed being invited at the meeting together with Ukraine was “another confirmation that the progress by Georgia and Ukraine on the NATO integration path is well-received by our partners in NATO.”

On his part, NATO Secretary General Jens Stoltenberg highlighted in his opening remarks at the session, that “Georgia and Ukraine are among NATO’s closest partners, contributing to NATO’s operations and missions, and aspiring for membership in the Alliance.”

“Allies stand by their decisions taken at the Bucharest Summit, and we remain committed to provide political and practical support to Georgia and Ukraine,” he asserted. Recalling the 2021 Brussels Summit, the Secretary General pointed to the strong support of Allied Heads of State and Government for the territorial integrity and sovereignty of Ukraine.

Speaking of the outcome of the Ministerial, the Georgian Foreign Ministry said the meeting once again confirmed NATO’s continued commitment to the Declaration of the 2008 Bucharest Summit, which states that Georgia and Ukraine will become members of NATO.

The Foreign Ministry reported that the NATO ministerial adopted a special report detailing the progress made by aspirant countries on their integration into the Alliance, and outlining new directions of assistance for them.

The November 30-December 1 ministerial comes ahead of and in preparation for the 2022 NATO Summit in Madrid, where the Alliance is set to adopt its next Strategic Concept.

According to the Georgian Foreign Ministry, the Georgian side had prepared its own vision on strengthening the Alliance’s political and practical support to Georgia to present to the Ministerial on December 1. FM Zalkaliani also had the possibility to voice Georgia’s expectations for the upcoming Summit. 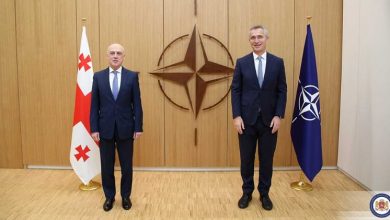