Minister Bregadze said the military hospital is well-equipped to treat the former President, but the transfer requires Saakashvili’s consent.

He warned, however, that if supporters of Saakashvili obstruct the transfer, the ex-President will be taken back to the Gldani prison clinic, where he is placed against his will since November 8.

The ex-President has not yet responded to the offer. But previously, on November 11, Saakashvili dismissed the possible transfer to the Military Hospital in Gori, citing its proximity to the Russian-occupied Tskhinvali Region/South Ossetia. “Russian occupying army and special forces are only kilometers away from the hospital.”

Nikoloz Kipshidze, Saakashvili’s personal doctor, said in the early hours of November 19 that the ex-President would need to be transported to a multi-hospital that has the capacity to conduct magnetic resonance tomography. He said Gori military hospital does not have the necessary equipment.

Parliamentary Vice-Speaker Davit Sergeenko, former longtime Health Minister of the Georgian Dream government, noted also on November 19 that Gori military hospital would be an appropriate fit for Saakashvili’s treatment. However, he also highlighted that the clinic does not have an MRT device.

Reactions to the decision

President Salome Zurabishvili welcomed the plan of transferring Saakashvili to the Gori hospital – “a decision that fully corresponds to the Strasbourg Court’s demands.”

Explaining the decision, GD chair MP Irakli Kobakhidze said they were primarily guided by the values the ruling GD party places on human, human life and health. He referred to Elene Khoshtaria and her deteriorating health as one of the reasons they made the offer. “We had to make a concrete decision without a delay.”

Besides, Kobakhidze reiterated that they considered medical and security requirements. He maintained that the Gori Military Hospital, just like the Gldani prison clinic, is well-equipped with medical equipment and staff. “It is also the hospital where security is maintained to the highest standard.”

MP Papuashvili of GD also stressed that they made the decision to, among others, help Saakashvili “make his own decision and do what the ECHR urged him – to end the hunger strike.”

One of the United National Movement leaders Levan Khabeishvili, voicing his stance at an opposition rally, did not oppose the idea to transfer Saakashvili to the military hospital but stressed it is a decision that should be made by doctors, not by the GD leaders. The doctors “should take the responsibility for Saakashvili’s life and health,” he said.

Commenting on the developments, the Public Defender said she thinks Mikheil Saakashvili should end his hunger strike, since “according to the doctors, the continuation of the hunger strike at this stage will most likely lead to a fatal outcome.”

Lomjaria said it would return everything to the framework of the ECHR’s November 10 decision. “The Court would need to assess whether the state has offered a safe environment and highly qualified medical care to a patient who has agreed to the Court’s calls to end the hunger strike.” 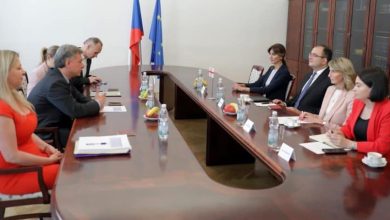