Tamaz Stepnadze, a man attending United National Movement’s rally on November 11 sustained an injury to his head after being hit with a piece of concrete thrown from a nearby residential building.

The incident took place in Tbilisi’s Saburtalo District, in front of the State Security Service’s “Moduli” building, where the UNM and supporters of Mikheil Saakashvili were demanding, among others, the transfer of the ex-President from the prison clinic to a civilian hospital.

According to the man’s account, a person threw the piece of concrete from the sixth story of the residential building. The man said his injury was not severe, but the emergency physicians had to give him stitches.

Stepnadze said several other people were also hit by the fragments of the concrete, shattered after the blow. He reckoned he was not deliberately targetted by the unidentified attacker, arguing the person threw the object in a general direction toward the attendants of the rally.

The injured man said police questioned him following the incident. The Interior Ministry confirmed to Civil.ge that they have opened an investigation into the incident, but did not specify the article under which the probe is being carried out.

The police did not provide any further details on the incident.

Opposition has rallied at several locations during the week, protesting the government’s treatment of the imprisoned ex-president, Mikheil Saakashvili and demanding his transfer to a civilian hospital for monitoring his deteriorating state of health. Saakashvili has been on a hunger strike since his arrest on October 1. He was transferred to a prison hospital on November 9, against his will. 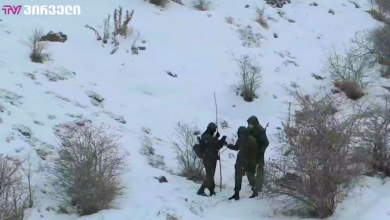