The Public Defender’s Office issued a statement urging the Ministry of Interior to release information concerning the location of 23 out of 46 persons detained this morning.

According to the statement, the representatives of the Public Defender’s Office have so far visited 23 detainees. Out of them, one has signs of injuries, others did not complain of police mistreatment.

However, the exact location of the 23 other detainees remains, so far, unknown. The statement reads that the police “continues the practice – incompatible with human rights – of failing to inform the family and defense lawyers of the detainees during the protracted period of time”.

Consequently, the defense lawyers have no possibility of discussing with the detainees before the court hearing. Even in cases where the location of detention is known, the access of defense lawyers is often impeded for hours.

The detentions took place this morning, as protesters gathered in front of several government buildings, demanding the transfer of incarcerated ex-president Mikheil Saakashvili to a civilian medical facility. 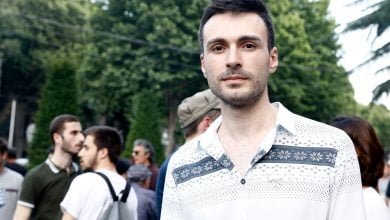