According to new public opinion survey commissioned by the National Democratic Institute (NDI), a U.S. non-profit, Georgians are largely pessimistic about the direction of the country and the performance of institutions, as they identify jobs, poverty, and inflation – all worsened by the pandemic – as the top issues. Also, vaccination hesitancy remains high, especially among younger generations.

The survey was fielded by the Caucasus Resource Research Centers (CRRC) for NDI between July 13 and July 25 with the financial assistance of the UK Aid, and was carried out through nationwide mobile phone interviews (excluding occupied territories) with 2,016 respondents and has an average margin of error plus, minus 1.3%.

Asked to rate the performance of the government, 52% assessed it as bad, while 36% evaluated it as good. 9% did not know. 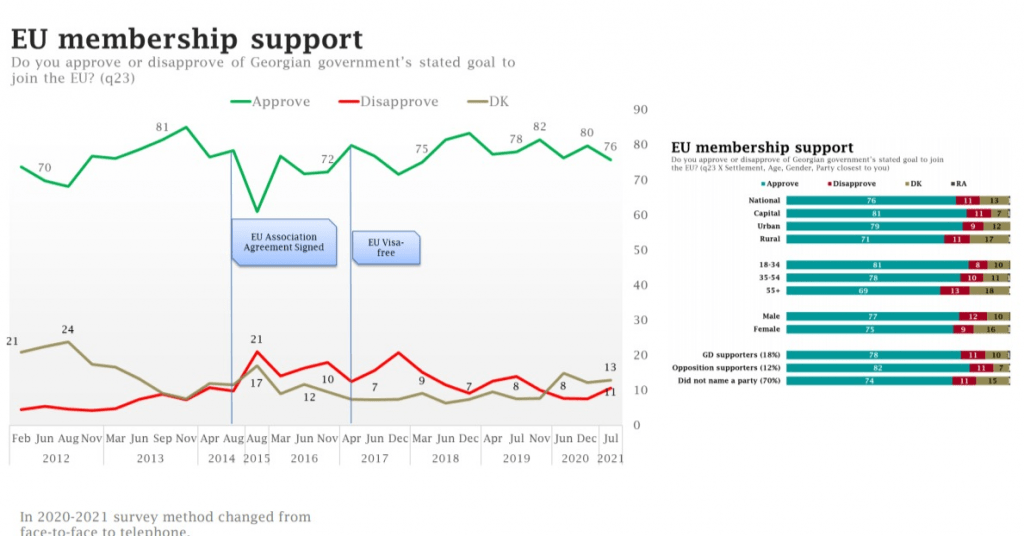 53% of respondents assessed the management of COVID-19 pandemic in the country as good, as opposed to 37% which rated it as bad.

Asked how they see vaccination process going in the country, 45% responded it is going badly, 37% said good, 18% don’t know. Tbilisi residents are most critical about the process with 54%, NDI survey said.

42% of respondents noted they don’t have enough information about vaccination, while 54% said they do.

47% of respondents said they will not get vaccinated, 35% said they will, 7% reported they already received vaccines, 11% don’t know. 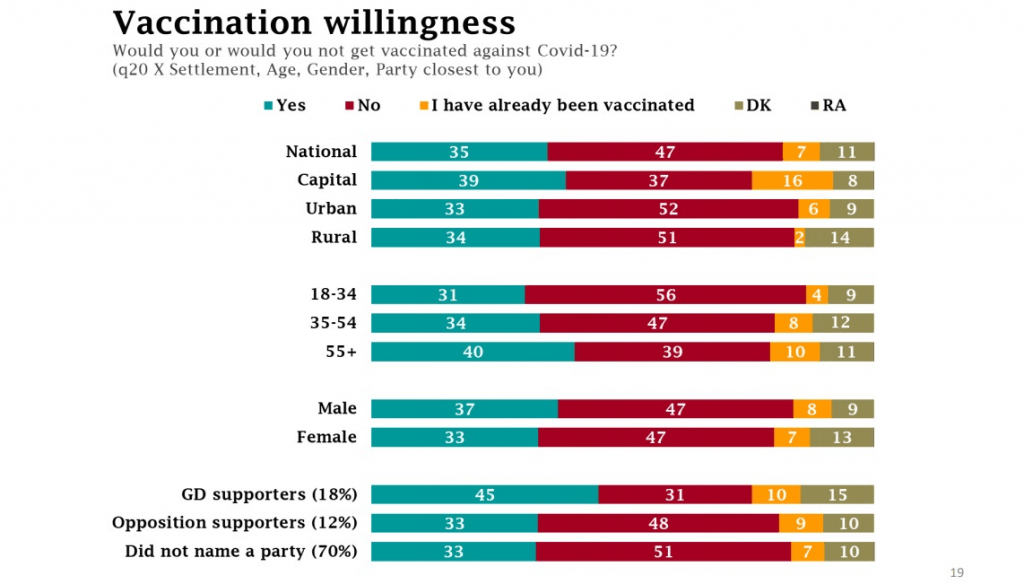 42% said they know how to register for vaccination, while 56% said they don’t know. Tbilisi residents are more aware of how to register, with 61% knowing and 37% not knowing. Figures stand at 45% and 54% for urban areas, respectively and at 27% and 71% for rural populations.

Jobs, poverty and rising prices were named as top three national issues with 41%, 38% and 29%, respectively (respondents could name up to three answers), followed by territorial integrity issue, pensions and education with 20%, 15%, and 13%.

Nationally, 68% of respondents said they are affording fewer products, goods and services before the start of COVID-19 pandemic in March 2020. 29% said they afford the same amount. 2% afford more. 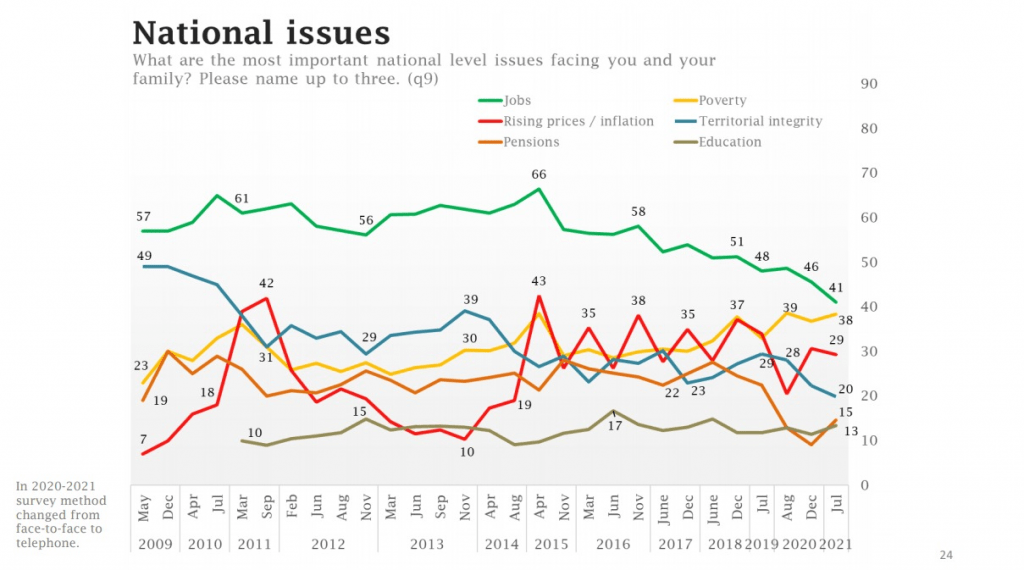 The poll also revealed that according to 56% of respondents cost of medicine is the biggest issue facing Georgia’s healthcare system today. 25% said the cost of medical care, 18% said COVID-19 related issues (respondents could provide up to three answers).

The ranking of top three issues were common for supporters of both, the ruling Georgian Dream and opposition parties, as well as for those that did not name party of their preference.

In other urban areas, however, roads, water supply and environmental pollution were named as top issues by 29%, 14% and 11%, respectively. Roads and water supply were named by rural residents with 38% each.

Performance of Institutions, Sources of Information

The performance of Sakrebulos outside the capital city were assessed as good by 26%, as average by 34% and as bad by 29%.

Only 10% of respondents rated the performance of the Parliament of Georgia as good, 33% assessed it as average, while 47% rated it as bad.

Asked which issues they would like the parties in Parliament to discuss, 45% named jobs, 41% said poverty, 33% said healthcare. Rising prices and education came next with 30% and 18%, respectively. 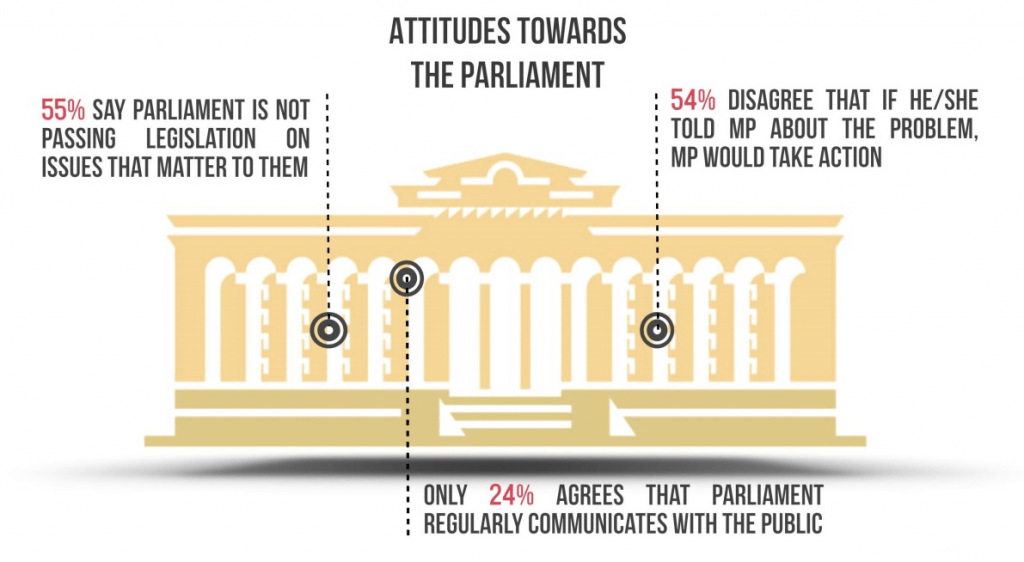 Majority of respondents did not say or do not know which party is closest to them. 51% said no party, 10% said don’t know, 9% refused to answer. 18% named the Georgian Dream, while 6% said the United National Movement. NDI said these figures cannot be taken as a guide to upcoming elections in October, due to low declared support for individual parties.

Georgia’s Foreign Trade Up 37% in January-May