The Center for European Policy Studies (CEPS), a Brussels-based think tank, published on February 25 the Balkan and Eastern European Comparisons report, which compares the “progressive alignment on EU laws and norms” of EU-aspiring countries – the Balkan states and Georgia, Ukraine and Moldova, the three Eastern Partnership states that have signed the Association Agreement.

The study looked into political and legal issues, macroeconomic performance and trade policies, among others, and assigned ratings to each of the countries.

With an overall score just below 2 of the total 3, Georgia ranked as moderately prepared for alignment, surpassing the other AA states, as well as Albania, Bosnia and Kosovo*. However, Georgia scored relatively lower than Montenegro, Serbia and North Macedonia, the three top performers. 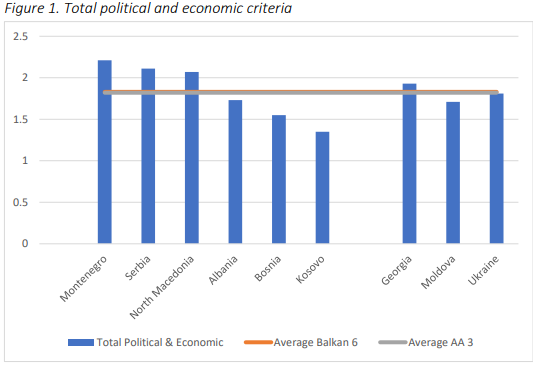 The study rated Georgia as a “dysfunctional democracy,” as the country landed last in the “electoral democracy” criterion. As the reason for the low ranking, the think tank cited the detention of United National Movement Chair Nika Melia, as well as the “allegations of serious irregularities” in the October 2020 parliamentary polls, which led to the opposition boycott of the Parliament.

“Opposition parties push for renewed parliamentary elections, which if conducted according to correct standards, could rehabilitate the situation,” the CEPS report added.

However, Georgia scored best alongside North Macedonia in terms of rule of law, “with both ranking quite close to the three newest EU member states” – Croatia, Bulgaria and Romania. Georgia also ranked “by far the best of all countries shown,” including the latter three, in tackling corruption.

The study took a GDP per capita of USD 20,000 as the norm, a number that Georgia’s corresponding figure of 2019, USD 15,014, fell behind “by a significant margin,” albeit similarly to the other AA states.

However, Georgia alongside North Macedonia, scored “outstandingly well” compared to the other EU-aspiring states in economic policy, even ranking above the three newest EU members, according to the World Bank’s Ease of Doing Business index.

Citing EBRD transition indicators which show how close a country’s policy “has moved towards advanced modern standards,” the study said Georgia ranks among the “best of the Balkans,” while Ukraine and Moldova fall behind. EBRD ranks Georgia outstanding for “good governance” as well, the report added.

Georgia also outranked the Balkan states in trade measures such as tariffs and quotas, “owing to its extremely open trade policies for goods and services, and the efficient and de-corrupted policies…”

The CEPS report said Georgia “has a functioning air transport agreement with the EU and is in the course of approximating EU legislation in the fields of road freight, railways and international maritime transport, and with international road transport rules well advanced.”

However, the study ranked Georgia “somewhat lower” than Serbia, Montenegro, Albania and Ukraine in terms of environmental preparedness for EU norms, citing “serious challenges with regard to air quality.”

With regards to employment reform, according to the study “Georgia has been making many legislative advances, but safety provisions at work, especially in the mining sector, remain a weak point.”

Noteworthy, that in education, the average score of the AA states lags behind that of the Balkans, while Georgia and Kosovo* are the “weak performers in the respective groups.”