With new election laws in effect, the upcoming October 31 parliamentary polls in Georgia leaves much room for diverse campaigning of Georgian political parties – be it older and bigger forces, or newly-emerged, smaller entities.

Civil.ge has compiled key campaign messages from most relevant political parties who will be contesting parliamentary seats in October.

Georgian Dream: ‘My Georgia is Here’

Not too unfairly criticized for its obsession with the 9 years of UNM-rule, the ruling Georgian Dream party seems to have enough on their bank account to afford all grammar tenses in their campaigning, also never missing a chance to mention Bidzina Ivanishvili’s charitable contributions.

Past continuous: As an example of GD’s past-fixation, one of their campaign clips, showing a former political prisoner, is aimed at demonstrating the improved human rights situation after the dark ages under the United National Movement.

Present Perfect: In their top campaign clip “My Georgia is here”, GD shows today’s Georgia seen from the photographer’s lens with all its beauty, human stories, and harmony.

Still somewhat nostalgic for the past? The United National Movement – a former ruling party and now the major opposition force – brings you again back to the future with lots of ex-President Saakashvili and even the Super-Mario redux featuring Misha is included in their campaign:

In their campaign videos for the majoritarian candidates, the UNM came up with an idea to count 5-point-plans on fingers, matching its historic ballot number – 5. Below is Nika Melia, promising joint opposition majoritarian candidate for Gldani district, Tbilisi, presenting the justice platform (and showing off his electronic monitoring wristband ordered to wear by the Special Penitentiary Service after his release on bail following June 20 events):

Fishing for those who can’t stand the UNM-GD dichotomy, the European Georgia, an outgrowth of the UNM itself, is here to offer “fundamental changes.”

Joined by several other parties, the EG has been, for example, advocating for U.S.-style justice reforms, pledging to invite foreign judges to adjure Georgian courts.

The party – double-slammed for vocally distancing from both UNM and GD (as shown in their controversial campaign brochures) –  tries to project itself as a constructive and cooperative force in a polarized election environment. In this respect, a distinctive social media campaigning of the joint opposition majoritarian candidate from the EG in Tbilisi’s posh Vake district – MP Elene Khoshtaria – shows endorsements from the leaders of other opposition parties:

While others are inviting judges and sheriffs, or even adhere to Trumpian social media campaigning tactics, Lelo, led by banker-turned-politician Mamuka Khazaradze, also chased its American dream by introducing nothing less than a  “Marshall Plan” to recover the Georgian economy. The plan includes creating a strong middle class and turning Georgia into a political, financial, logistical, and cultural center of the region.

Digging deeper into the past, David Agmashenebeli, a King-Reformer from medieval Georgia, has never ceased to be popular among ambitious Georgian politicians, becoming an inspiration for energetic Giorgi Vashadze from “Strategy Agmashenebeli.” As Vashadze prematurely tries to position himself as an opposition Prime Minister candidate, the party’s leading campaign line is the dichotomy of “Job doers’ Team” versus “Money Makers” from the GD.

Alliance of Patriots – Them vs Criminal Elites

Alliance of Patriots of Georgia, a Kremlin-friendly nativist party, does not appear to believe European Georgia’s positioning as a third alternative, counting the party and its leader Giga Bokeria to a group of villains among the ruling elites (however, their hostility towards the ruling party may be questioned by many). Their campaigning came under fire multiple times, including due to their alleged Moscow funding as well as thanks to their anti-Turkish hysteria.

One of their rally announcements says it all:

Hardly anything can surprise Georgian voters now since Rose-revolutionary Nino Burjanadze, a more sophisticated friend of Russia, has somehow found her place on the table among explicitly and assertively pro-western and anti-Moscow opposition forces, offering Georgian voters her “strength and experience.”

Alexandre (Aleko) Elisashvili, leader of the Citizens party, presents himself as someone who is ready to directly hear out public’s concerns – so, if you dial +995 593 58 40 52 on your phone, it’s Aleko on the other end of the line.

Anna Dolidze, a charismatic lawyer and usual misfit in Georgian politics, decided to run solo as a majoritarian candidate for Tbilisi’s Didube-Chugureti constituency.

Building on her earlier “city full of death” concept, Dolidze stands out by tackling human security issues, e.g. by regularly exposing the grave state of soviet-era elevators used by many of Tbilisi residents:

During the campaign I discovered the whole world of Soviet time elevators.

Despite its usual lower ratings, the right-libertarian Girchi party manages to make a noise loud enough to offer its eccentric leader Zurab Girchi Japaridze as a joint opposition majoritarian candidate for the Didube constituency.

However, while positioning as a future-oriented party, neither Girchi’s discourse is devoid of past traumas, as progressive policies are often feared by the party to be a specter of Communism that is still haunting Georgia.

When talking eccentrics, Labor leader Shalva Natelashvili on the other side of the political spectrum (at least declaredly) is not to be omitted.

While the “green” agenda had a greenlight from many old or newly emerged parties in Georgia, Labor’s Shalva Natelashvili has been recently trying to win social media users’ hearts with his focus on animal rights, besides other usual anti-oligarchic and anti-poverty lines. So here is him posing with a cat and advocating for municipal animal shelters in every region:

If you believe that traditional values and family purity are in danger – but the solution does not necessarily have to include Moscow – the Conservative party led by Zviad Dzidziguri could be an option to consider in the upcoming polls.

Having split from the ruling party with whom it worked as a junior coalition partner for 8 years, the party is testing its grounds independently with the campaign message “more conservatives – more stability” – probably something to yearn for in today’s everchanging and chaotic world. 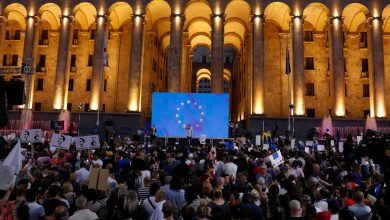