Ambassador Daniel Fried, distinguished fellow at the “Atlantic Council,” had a forty year-long career in the Foreign Service in the U.S., making him an expert on Central and Eastern Europe and Russia. During his diplomatic service, Ambassador Fried served the key postings around the world, including assistant secretary of state for Europe and Eurasia, US ambassador to Poland, and State Department coordinator on sanctions policy. Voice of America’s Ia Meurmishvili sat down with Ambassador Fried to discuss political polarization and other related issues in Georgia ahead of crucial 2020 polls in South Caucasian nation.

Daniel Fried: I think it is always a good idea to be able to talk to other countries, even when they are essentially an adversary, as Russia still is.  I do not fear a dialogue between Georgia and Russia, unless Georgia is suddenly going to make some side deal that is harmful, but I have no evidence of that.

You just came back from Georgia. What do you think of political divisiveness in Georgia? Is there any chance of any constructive cooperation [between different political forces in Georgia]?

That depends principally on the government.  I know the government is going to say “we are willing, but the opposition has to help.”  But, governments, the people in power, always have the first responsibility.  I remember the arc of the Saakashvili government, it started to go bad when Saakashvili and his people exhibited a certain contempt for Georgian society, they would just run it over, they thought they knew best. At that moment, they started to waste their political mandate. They did a tremendous amount of good for the country, especially in the early years and they deserve credit for this.  And, I will give it to them. But, the issues for which they were voted out of office – were really issues of contempt for Georgian society and a lazy attitude about democratic freedoms. And a lot of them would acknowledge that. Ultimately, to the credit of Saakashvili and his people, they lost power in a democratic election, which they did not contest, and it was a remarkable moment. That is to their credit and remains to their credit.

The current Georgian government was democratically elected.  They are the legitimate, proper government of Georgia. We want to work with them. However, the demonstrations in June in this bizarre episode in the Parliament is also… [making me] wonder whether we were watching a repeat. It would be too bad.

I had the impression then that the government was at least willing to consider working with the opposition but under their own terms.  As the government, as the people with the power, they need to set the tone. That was very much our message, that democracy is not a luxury.  It is the basis for Georgia’s political appeal to the world, to treat them seriously as part of Greater Europe. I think it would be good if the government remembered that.

There is elections next year and they [opposition parties] need to be talking to Georgians, making their case, and trying to win the election by appealing to the Georgian people.  It is easy for an American to say that both sides need to work together. It is hard! Look at American politics!  Who am I to speak of political divisions?

How important would it be for the opposition parties to talk to each other in addition to talking to the government?

They need to find ways to talk to each other.  Often when American embassies are well led, we can provide a roof, so to speak, because we are seen as neutral, which means, by the way, we have to be seen as neutral.  We cannot take sides in Georgian politics. We work with the government because it was democratically elected. We work with the opposition because that is part of democracy. We have to be neutral. But, for heaven’s sake, the Georgians should not have to rely on the Americans to provide a neutral roof under which to meet. They need to be able to have a quiet dialogue and not burn each other. Again, easier said than done. The Georgians might say to me: well, who are you to speak of political divisiveness given what is happening in Washington this very day. They are right. Nevertheless, we must behave according to our best traditions not our worst practices.

How big of a challenge do you think Russian sympathizers or pro-Russian movements are for Georgia as the country is leading up to the 2020 elections? Do you see any threats to the democratic process?

The Russians are always trying to divide societies, to polarize politics, to “intensify the contradictions,” as Vladimir Ilych used to say.  I think this is not a problem unique to Georgia. The United States does not want to see bad Georgia-Russia relations. Russia is a neighbor. The countries ought to be getting along. The problem has been, that Russia’s conditions for good relations are conditions that Georgians cannot accept, which is, basically, that Georgia has to accept Russian domination. And, that is domination not based on mutual advantage, and mutual prosperity, but domination based on force and fear and against what Georgians have defined as their interests. This is the problem. It is not that Georgia lacks goodwill. It is that the Russians have asked too much. That said, the United States does not want to see bad Russo-Georgian relations. We just want to see that Russia respects Georgia as a country. 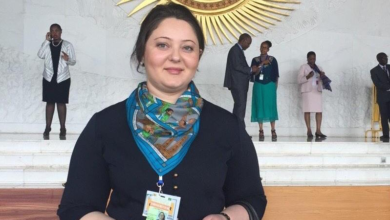