Police have detained a total of six persons – four during the initial scuffle, and two afterwards – during the rally in solidarity with construction workers, who have lost their lives in an accident yesterday. The rally was held on Chavchavadze avenue, one of Tbilisi’s central thoroughfares, where the accident happened.

Civic activists and students were calling for stricter application labor security measures by the state, under the slogans “Fight, so we don’t have to mourn”, “Tbilisi – City full of death”, “No to diktat of businessmen”.

Two known civic activists, Vakhushti Menabde of the Georgian Young Lawyers’ Association and David Subeliani of the “White Noise Movement” are reportedly among the detained.

The police have confirmed the detentions to Civil.ge, although did not verify the identity of the detained. They say the detentions were taken under articles 166 (minor hooliganism) and 173 (resistance to the lawful demands of the law-enforcement officers) of the Administrative Offenses Code of Georgia. The detentions reportedly occurred as the protesters prevented the Police cordon from opening the road circulation.

The rally has started at the Government Administration’s office today at 7 pm, then moved to Chavchavadze avenue and to the site of yesterday’s tragic accident. Civic groups have long called for tightening monitoring of the labor safety rules, which have led to repeated accidents and loss of life, especially on construction sites and in Georgia’s mines. They have also demanded a meeting with Tbilisi Mayor, Kakha Kaladze.

The European Union has taken up the issue with the government, saying it was “concerned by the lack of progress in establishing an effective system for the supervision of working conditions, the employment relationship and the enforcement of labor rights and standards,” Johannes Hahn, the EU Commissioner for European Neighborhood Policy and Enlargement Negotiations, wrote in his letter on April 11, 2018.

As the rally has ended, but the participants have headed to the police detention facility.

UPDATE: as of 00:55, Police have confirmed to Civil.ge that the detained activists were released from custody. 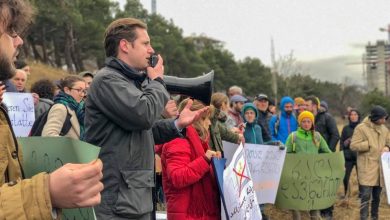