Dozens of cab drivers held a rally on Thursday in Tbilisi, demanding suspension of forthcoming municipal taxi regulations. They claim the new regulations threaten their livelihoods and jobs.

Protesters drove through the streets of Tbilisi beeping their horns, marching to the residence of Georgian Dream leader Bidzina Ivanishvili in Tbilisi’s Sololaki neighborhood.

Speaking to reporters outside Ivanishvili’s residence, taxi drivers said requiring them to color their cars in white (the regulation will come to force on October 1, 2019), would make the vehicles unfit for selling in the future.

The rally was joined by the Labor Party. Shalva Natelashvili, the party leader, said the new regulations are unlawful, warning to organize permanent sit-in protests.

Earlier yesterday, Tbilisi Mayor Kakha Kaladze announced that municipal authorities were ready to allow pasting of white stickers instead of painting the cars entirely. “If they do not want to color their cars in white, they have an option of applying white stickers; and like in the case of painting, they will not have to bear any costs for it,” he explained.

Organizers called off the rally later in the evening. They are to meet with the Mayor today.

Kaladze announced new taxi regulations last year. As part of the first wave, entered into force on October 1, 2018, all taxis operating in Tbilisi were required to go through mandatory licensing.

In the second batch of regulations, to come into force on October 1, 2019, cabs will be divided into two categories – hailed and app-based taxis, with the former having to be of white color only (painting works will be funded by private companies in exchange for displaying their advertisements). 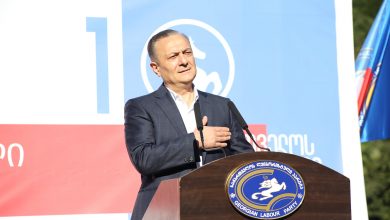