TBC Bank, the leading Georgian banking company, is facing a criminal investigation for alleged breaches of money-laundering legislation, involving a USD 17 million transaction that took place back in 2008.

Mamuka Khazaradze, the Bank’s founder, denies the charges, claiming the legality of the said transaction was inspected multiple times by the fiscal authorities, the National Bank of Georgia (NBG) and international auditors and no “red flags” were raised. He says the bank is suffering an “orchestrated” political attack.

To make sense of the developments, we offer you a brief explainer on the issue.

With about 7,300 employees and 149 branches, TBC Bank is the largest banking group in Georgia. Its shares are wholly owned by TBC PLC, a UK-based company listed at the London Stock Exchange.

The Prosecutor’s Office is leading an investigation under article 194 of the Criminal Code of Georgia, involving legalization of illegal income (money laundering).

It launched the probe in August 2018, based on the preliminary inquiry by the Financial Monitoring Office, an agency reporting to the Prime Minister, which – according to the prosecution – “clearly demonstrated signs of money laundering and other illicit actions.”

The ongoing investigation into TBC Bank was made public on January 8, following the media reports that the Prosecutor’s Office seized case-related documentation from the bank.

The investigation says, in April and May, 2008 TBC Bank gave two Georgia-based companies – Samgori Trade and Samgori M – business loans worth USD 16.7 million in separate installments. This amount was later loaned back to Mamuka Khazaradze and Badri Japaridze, chairman and deputy chairman of the Bank’s supervisory board, respectively.

Prosecution also said that the loan was written off in 2008 and the companies were fully released from financial liabilities in 2012. Khazaradze and Japaridze have not reimbursed loans given to them either.

Khazaradze and Japaridze have not been charged by the Prosecution; the two were questioned as witnesses to the investigation.

The National Bank of Georgia, the country’s financial regulator, launched an inquiry into the transaction in August 2018, based on the same preliminary inquiry by the Financial Monitoring Office. Just like the prosecution, the NBG made its first public statement only in January 2019.

The NBG completed the examination of TBC Bank’s accounts in November 2018, imposing a GEL 1.1 million fine over “actions contradicting the conflict-of-interest legislation,” and requesting written explanations from the Supervisory Board concerning the disputed transactions.

Unlike the Prosecutor’s Office, NBG has not raised the “money laundering” charge and focused on milder “violations of conflict-of-interest regulations.” The regulator has refrained from giving additional clarifications outside their regular, written press statements, insisting it would damage the financial sector’s stability.

On February 13, the NBG said TBC Bank’s response was unsatisfactory and requested the shareholders to remove the Chairman of the Supervisory Board, Mamuka Khazaradze and his deputy Badri Japaridze. NBG stressed the move would improve TBC’s governance structure and would safeguard it from “undue influence of one or two individuals.”

TBC Bank and the National Bank reached an agreement on February 21, shortly after Khazaradze and Japaridze announced their resignations from the Supervisory Board, as required. As part of this deal, TBC Bank withdrew its lawsuits against the regulator and paid a GEL 1.1 million fine.

When the news broke out on January 9 that TBC was under criminal investigation, the Bank and the founders were quick to dismiss the allegations, saying the transactions were legal and actions by the Prosecutor’s Office represented a “premeditated attempt to discredit and damage” TBC Bank’s reputation.

TBC and its founders continued defending their record in later statements, but as company shares started to slide on the news of NBG requiring Khazaradze and his deputy, Japaridze to step down, they were forced to seek reconciliation with the regulator; Khazaradze and Japaridze resigned and TBC agreed to recall lawsuits and pay a GEL 1.1 million fine.

Khazaradze and Japaridze keep their positions at UK-based parent company TBC Bank Group PLC, where the former is the chairman of the Board of Directors, and the latter is the deputy chairman.

The two, however, vowed to continue the legal proceedings individually. Throwing aside the caution of their earlier statements, they started speaking of an “orchestrated attack,” “blackmail” and “threats” by politicians and public officials, and attempts to take over the Bank.

Khazaradze and Japaridze gave additional clarifications on the disputed transaction, saying they have borrowed the money to increase the bank’s statutory capital. TBC founders said in 2007-2008 the Georgian economy was growing dynamically and to increase the bank’s capitalization, the two started searching for a foreign investor.

Their choice fell to the Allied Irish Bank (AIB), which agreed to contribute USD 80 million in refinancing, provided the TBC managed to raise those funds first. Having secured 60 million from J.P. Morgan and the Ashmore Group, they reached to their Georgian business partners for the remaining 20, including Avtandil Tsereteli, owner of Samgori Trade and Samgori M.

Khazaradze and Japaridze claim Tsereteli, their friend and long-time business partner, agreed to contribute USD 16.7 million, but the two maintain they were not aware that the money they received from him was initially loaned from TBC Bank. They insist Tsereteli’s companies had a line of credit in TBC worth USD 35 million, enabling him to access funds at any time, without going through regular – and more scrupulous – lending procedures.

Khazaradze and Japaridze suggest they have learnt that the disputed amount was borrowed by Tsereteli from TBC Bank only after the Russo-Georgian war of August 2008. The bank founders stress the armed conflict significantly affected the country’s financial stability, resulting in bad debts worth nearly one billion GEL.

They also say a total of GEL 200 million was accrued in TBC in bad debts, and this included the loan by Tsereteli. All of that portfolio was written off as a part of post-war adjustment.

Impact on the Anaklia Port Project

Developments around TBC Bank have brought into question the fate of the Anaklia Deep Sea Port project, a USD 2.5 billion investment on the Black Sea coast in Zugdidi Municipality not far from Abkhazia, where Mamuka Khazaradze’s TBC Holding is the leading partner.

The Anaklia Development Consortium, a joint venture of TBC Holding and U.S.-based Conti International, was awarded the contract to build and operate the deep sea port in 2016; construction works commenced in December 2017 and are currently underway.

Khazaradze links the TBC case to the construction of Anaklia port, suggesting that the purpose of the investigation could be to squeeze him and Japaridze out of the project.

He also insists lack of clarity around TBC is impeding finalizing of the pending agreements on funding amounting to USD 600 million with foreign investors, expected in coming May or June. Khazaradze says money laundering charges against him – the leading partner – would make that deal unlikely.

The government officials, on their part, have said the project would not be imperiled. Their statements have been somewhat ambiguous: while many have repeatedly stressed the importance of the deep sea port project, others – such as Economy Minister Giorgi Kobulia and GD Political Secretary Irakli Garibashvili – pointed at unfulfilled obligations by the Consortium, arguing that it failed to raise the funds in line with the contractually agreed timeline.

Threats from the Interior Minister?

Khazaradze is accusing the authorities of carrying out an “orchestrated attack” against the bank, saying four state agencies opened simultaneous and pre-planned inspections in mid-2018. The businessman leveled the most dramatic accusation against Interior Minister Giorgi Gakharia.

Speaking in front of the Parliament’s Finance and Budget Committee on March 4, Khazaradze said he received a threatening letter from the Interior Minister ahead of the second round of Presidential elections in 2018, where the ruling party-endorsed candidate, Salome Zurabishvili, finished neck-to-neck with UNM-led coalition’s Grigol Vashadze. According to Khazaradze, Gakharia was warning him of reputational damage, should he fail to cooperate with the authorities in the pre-election period.

Giorgi Gakharia was quick to respond to the charges, saying the statement amounted to “a privileged businessman” making “an attempt to gain immunity [from prosecution]” by “spreading rumors.”

The Prosecutor’s Office commented on the issue as well, saying the letter submitted to the investigation by Khazaradze, is a copy of the original document and contains no identification signs and data, rendering it impossible to verify its authenticity. The one-page letter, published by the Prosecutor’s Office, speaks of Khazaradze being against the authorities and contains three conditions that allegedly needs to be fulfilled before the second round of Presidential elections.

Zviad Kordzadze, Khazaradze’s defense lawyer, confirmed that Khazaradze fulfilled one of the terms outlined in the letter, the one which concerned him directly, apparently referring to his public statement of November 2, where he spoke against UNM’s possible return to government.

The lawyer also explained that although Khazaradze shares the spirit of the letter, it was not written out of his free will, and was done with view to protect the TBC Bank and the Anaklia deep sea port project.

It was further stated by the lawyer, that Khazaradze has told several of his close associates concerning the letter, and subsequently briefed a wider circle of businessmen, as well as foreign ambassadors.

For further background on the TBC investigation, we recommend reading a timeline compiled by the Transparency International Georgia.

You can also look back at our coverage of the developments by clicking on this link. 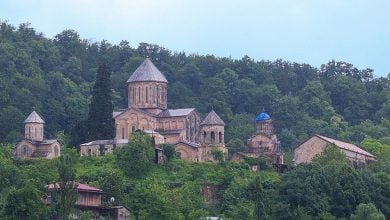