Tsikhelashvili drew particular attention to the restriction of Georgian-language schooling in Abkhazia’s predominantly ethnic Georgian-populated Gali district, where children are “deprived of the right and opportunity for education on their native language” both at schools and kindergartens.

According to the Reconciliation Minister, in most cases neither teachers, nor children or their parents know the Russian language, which “is being imposed on them at all schools for several years now.” She said Georgian language is taught for one academic hour per week in schools, which she believes “is not at all sufficient”, even for learning Georgian, but what is required is  “not teaching the Georgian language, but rather teaching [subjects] in Georgian [as native language],” the Minister underscored.

Tsikhelashvili argues the Georgian population of Gali lives under conditions of “ethnic discrimination” and “Russification.” She said “well-determined attack on Georgian identity” is underway, with local authorities forcing ethnic Georgians to change their surnames into Abkhaz, in order “to receive access to certain [identity] documents” and to fully exercise their rights.

The Reconciliation Minister then hailed the high academic level of those school graduates from Gali who get enrolled at universities in the Tbilisi-controlled territory, and expressed concern, that the number of school children in the district is declining, among others, due to the imposed language barrier.

According to the Minister, last year up to 50 children were forced to leave the schooling in Gali district and to move to Tbilisi-controlled territory “because it was impossible for them to receive any education under such conditions.” This year their number increased to 69.

Tsikhelashvili also spoke of negative practice of “simulated war games”, saying they were aimed at fomenting hatred against Georgia. She said parents have been reporting the case when an ethnic Georgian boy was forced to imitate being an Abkhaz, killed or wounded by a Georgian, thus creating “the icon of enemy, [and forming a] narrative of confrontation.”

Over the last three years, Moscow-backed authorities of Abkhazia and Tskhinvali region have successfully squeezed their mother tongue out the last remaining Georgian-language schools in Gali and Akhalgori districts, switching instead to the Russian language.

Georgian Foreign Ministry reported last year that “drastic changes were made” in the curriculum of those 11 schools, which were  considered as all-Georgian before; Russian language teaching was introduced in the first four grades, while all subsequent entry-level classes started teaching in Russian. 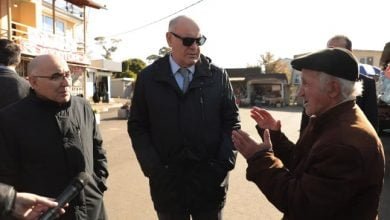