On October 28, Georgian citizens will elect their fifth president for a six-year term.

With the Election Day approaching, Civil.ge continues its weekly election digest, a news compilation covering the presidential campaigns, election procedures and other pre-election developments, as well as the shortcomings reported during the pre-election period.

The second digest covers the developments of past week (September 17-23).

Election Monitoring and Violations – PM Bakhtadze in the list of opposition supporters:

* The National Democratic Party and the State for the People are part of the UNM-led coalition. They have nominated their candidates reportedly for securing free advertisement times on television channels.

— Davit Bakradze of the European Georgia continued actively campaigning in the regions.

In his meetings, the candidate stressed Georgia needs changes. “Voters will be electing not a particular name and surname, but they will be choosing changes – better life and a more optimistic future; voters should use this opportunity to change their lives for the better,” he told his supporters in Batumi.

“The country is facing poverty and a lot of other problems and there is nobody who would care about it,” he said in Batumi, expressing hope that voter turnout will be high during the upcoming elections.

— Grigol Vashadze of the UNM-led Coalition continued campaign meetings in Tbilisi and the regions, accompanied by senior UNM politicians and members of their partner parties.

During a meeting in Kobuleti, Vashadze stressed “voters want political change and no one will go against their will. “[We have to say] no to poverty, no to unemployment, no to drug cartels and business racketeering – no to Ivanishvili’s corrupt rule in Georgia,” Vashadze told his supporters, adding that the upcoming elections will mark “the start of the process of government change.”

Vashadze also held a press briefing in Tbilisi on September 20 on the government’s initiative to cultivate medical cannabis, saying he would launch collecting signatures for initiating constitutional amendments on banning production of cannabis and other narcotic substances. “My position is that people should not be arrested for drug use; use of drugs is not a crime, but production and sale is a crime,” Vashadze said.

Vashadze and his teammates also expressed protest over the incident in Kutaisi municipality council (Sakrebulo), where UNM’s Gia Ukleba was physically insulted. The candidate said it was GDDG Sakrebulo members who assaulted Ukleba. “It is not an attack on an individual lawmaker, but it is an insult of our state, democracy and ideals; we will respond to violence with new initiatives and new visions,” Vashadze said.

— Davit Usupashvili of the Development Movement was campaigning in Tbilisi mostly. He also engaged with television channels widely.

In an interview with TV Pirveli, he spoke about the truck driver protests, slamming the Finance Ministry for “yet another unreasonable move.” Usupashvili added that in order to regulate the traffic movement, the decision “should apply to all vehicles and not only to those transporting wheat.”

On September 17, the presidential-hopeful attended the meeting with businesspeople organized by the U.S. Chamber of Commerce. “Informing both Georgian and foreign businesspeople on political issues is very important,” he said after the meeting.

As part of his election campaign, Usupashvili also participated in wine harvest in the eastern Georgian region of Kakheti.

— Kakha Kukava of the Free Georgia was mainly using TV appearances to express his views.

On September 16, Kukava took part in the Church-led protest against cannabis cultivation. The candidate said: “marijuana business is nothing but enrichment of one family at the expense of degradation of the Georgian youth.”

On September 18, the Free Georgia candidate spoke on foreigners living in Georgia, saying: “our small nation will go extinct if we do not impose restrictions on the influx of migrants from Turkey, various Arab countries, Pakistan and other countries.”

On September 19, Kukava met with journalists of Iberia TV, expressing his support amid the TV management’s claims that the authorities are trying to shut down the broadcaster.

— Shalva Natelashvili of the Labor Party was actively campaigning as well. Last week, Natelashvili visited Gurjaani and Kutaisi and introduced his electoral promises to local voters.

At a meeting in hail-hit villages in Gurjaani, Natelashvili slammed the government for not assisting the farmers, while in Kutaisi he criticized the GDDG decision to relocate the parliament to Tbilisi. “The Parliament does not need relocation, but rather Ivanishvili’s regime should be relocated and thrown onto the ash heap of history,” he said.

The candidate also raised the issue of ethnic Georgians living in Azerbaijan, saying in his special press briefing that the Azerbaijani government’s decision “to close down Georgian sectors in three Georgian-populated villages” was not a friendly step and was “equally disgraceful to Aliyev and Ivanishvili.”

At a news briefing on September 22, Shalva Natelashvili spoke about the reported increase of electricity tariffs, saying as president he will “progressively reduce the fares to a normal rate,” and will stand against big hydropower plants.

In the reporting period, Natelashvili was actively using his Facebook page to engage with the voters. The candidate has live Q&A sessions every Thursday.

A minor incident took place in Zugdidi on September 22, when a group of opposition supporters voiced their criticism of her controversial Russo-Georgian war-related remarks. The protesters demanded meeting with the candidate, but were not allowed to do so.

Majority leader Archil Talakvadze, who attended the meeting in Zugdidi, said the ruling party would inform the international observers of UNM’s “provocations.” Talakvadze stressed it was “immoral” that the people, “who showed themselves off during the war by fast running are now trying to propagate disinformation about Salome Zurabishvili.”

Zurabishvili commented on the “disinformation campaign” as well, saying its objective is to “put me against everyone, [including] the Church.” “As if I had said that I would support drug promotion; I, on the contrary, said I would lead an information campaign [against drug use],” the presidential candidate said.

“The more deeply Russia penetrates into Abkhazia, the more rapidly the Abkhaz language and identity will disappear… As president, I will be constitutionally mandated to protect the Abkhaz language,” she noted, adding that territorial integrity will be restored “only peacefully.”

In Adjara, where she was accompanied by Regional Development Minister Maia Tsikitishvili, PM’s Regional Advisor Sozar Subari, and Head of Adjara Government Tornike Rizhvadze, Zurabishvili stressed the importance of self-government and delegating powers to local levels. 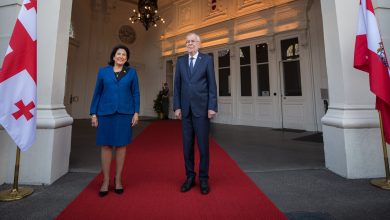 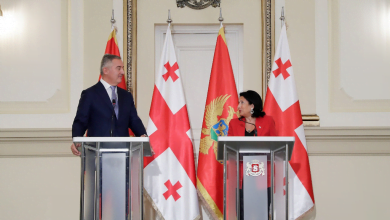