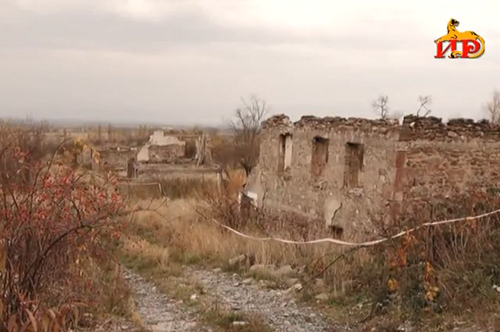 Tskhinvali Happenings – In search for excuses to demolish houses in the Georgian villages: On a visit to Tskhinvali, Geneva International Discussions Co-chairs were taken by their local hosts to the ruined villages Eredvi and Vanati that had been populated by ethnic Georgians prior to the ethnic cleansing that took place as a result of the Russo-Georgian War in August 2008. A story about the visit aired on a Tskhinvali TV channel styled the two villages as “burnt by the Georgian army in 2008,” even though in fact they had been destroyed by South Ossetian militants after the Georgian army and security forces retreated from the area. The story also reads that “all houses in these villages are ruined and need to be demolished, since they cannot be restored.” The Georgian position on the matter is that demolishing ethnic Georgians’ homes in the villages around Tskhinvali constitutes a continued ethnic cleansing.

Tskhinvali Happenings – Khajimba comes on a visit: The Russian-backed Sokhumi leader Raul Khajimba went to Tskhinvali, meeting with his local equivalent Anatoly Bibilov. The two pledged to maintain close ties, with Bibilov repeating once again that “the main and only strategic partner today, both for Abkhazia and South Ossetia, is the Russian Federation,” and Khajimba expressing his joy because the two regions “have been recognized by the largest country in the world, and the greatest in terms of resources.”

Tskhinvali Happenings – Bibilov mentions transit route: Anatoly Bibilov commented on the idea of a future transit route running from Russia southwards through Tskhinvali Region/South Ossetia and the rest of Georgia while speaking in the Tskhinvali “parliament.” Bibilov thinks that such a route is necessary for countries like Armenia, Turkey and Iran, but says it could run through the region under his control only “according to the laws of South Ossetia” – a position that appears likely to prevent the route from actually happening due to its unacceptability in the eyes of Tbilisi.

Tskhinvali Happenings – Illegal detentions continue: 33 people had been temporarily detained by the Russian-backed Tskhinvali authorities in a month for crossing the occupation line, styled by the authorities in question as a “state border,” said Tskhinvali security service on November 20. The individuals thus detained usually are local residents, trying to look after their agricultural property.

Tskhinvali Happenings – Kulakhmetov congratulates Tskhinvali on separatism: Marat Kulakhmetov – a Russian military officer turned “ambassador to South Ossetia” – issued his congratulation to Anatoly Bibilov regarding the 28th anniversary of the launch of a separatist conflict in Tskhinvali Region/South Ossetia in November 1989. The peculiar aspect of the situation is that Kulakhmetov commanded the joint peacekeeping force in the region at the start of the Russo-Georgian War of 2008 – the same peacekeeping force that had been established in 1992, supposedly to help solve the problem within the territorial integrity of Georgia.

Georgian Prisoner Allegedly Exchanged: Giorgi Giunashvili – a Georgian citizen native of Tskhinvali who had been illegally jailed by the Tskhinvali Russian-backed authorities since June 2016 – was freed on Sunday, November 26. He was not released directly to the Georgian authorities, however. Instead, Tskhinvali transferred Giunashvili to the Abkhaz, who released him, allegedly in exchange for Tbilisi releasing an unidentified prisoner requested by Sokhumi. Anatoly Bibilov said Raul Khajimba personally asked him to facilitate the exchange. Georgian authorities have not confirmed they released any prisoner in exchange for Giunashvili at the time of writing.

Sokhumi Happenings – The identity-altering effort report: Tengiz Inal-Ipa, the chairman of “the Murzakan Abkhaz Council” – organization created by the Russian-backed Sokhumi authorities to facilitate adoption of the Abkhaz ethnic identity by the Gali district Georgians – reported to the Sokhumi-appointed head of Gali district Temur Nadaraia that about 300 Georgians have applied to formally change their ethnicity and family name into the Abkhaz ones.

Sokhumi Happenings – Sokhumi rejects compromise on Kilmarnock monument: Speaking about the 1992-1993 war monument in the Scottish city of Kilmarnock, which had been temporarily removed after a Georgian request to make it more politically balanced, Sokhumi “foreign minister” Daur Kove rejected any such change, saying: “we shall never allow for the names of the defenders of motherland to be put in the same row with those of the aggressors.”

The Military Aspect – Russian garrison of Abkhazia gets new specialists: The 7th Military Base of the Russian army – a strengthened brigade-sized unit encompassing the Russian forces in Abkhazia – has received a group of new military specialists. Over 250 of them have just arrived there from 17 different Russian military schools, boasting about 30 military specialties between them. The list includes operators of T-72B3 tanks, anti-tank Shturm-S and anti-air Strela-10 systems.

Western Voices – EPP issues a declaration in support of Georgia: In the document, issued by the European People’s Party prior to the Eastern Partnership summit in Brussels, the EPP reiterates its firm support for the Eastern Partners’ territorial integrity, and strongly supports “re-establishing the full sovereignty of Ukraine in Crimea, of Georgia in its occupied territories of Abkhazia and South Ossetia and of Moldova in Transnistria.” The document also reads: “We regret that Russia is refusing to fully implement the Six-Point Ceasefire Agreement between Russia and Georgia, negotiated by the EU presidency in 2008.”