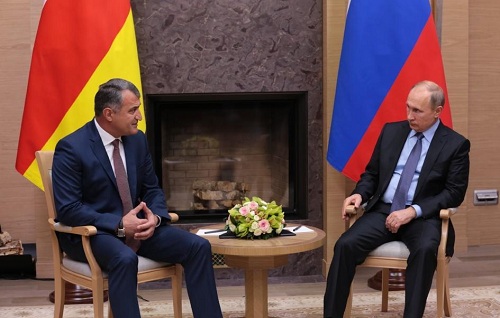 Russia’s Network – Bibilov meets Putin: Russian-backed Tskhinvali leader Anatoly Bibilov met Vladimir Putin in Moscow. Bibilov thanked the Russian President for inviting him, saying it was “very important for South Ossetia,” and spoke about how successfully South Ossetia was integrating with Russia. Putin, on his part, said that security matters were discussed as well, and that he agreed with Bibilov “to more closely coordinate steps in confronting challenges and threats to the security in the South Caucasus.”

Russia’s Network – Russian minister skeptical during Abkhazia inspection: Russian Minister for Northern Caucasus Lev Kuznetsov went to Abkhazia last week. Besides meeting Raul Khajimba, Kuznetsov also inspected construction projects financed by Russia. The inspection did not go very well. While visiting the building of the Abkhaz state university, for the reconstruction of which Moscow spent 706,8 million Russian rubles, Kuznetsov was left disgusted by the quality, saying: “such work cannot be formally accepted, this is a real disgrace.”

Russia’s Network – Bibilov sees future of Tskhinvali within Russia: During his trip to Moscow, Bibilov gave an interview to the Russian Interfax news agency. He repeated his own wish for Tskhinvali Region/South Ossetia to join Russia in the future, but, similarly to previous instances, had difficulty specifying when that might come about.

Russia’s Network – Bibilov wants to be friends with Assad: Following Sokhumi’s lead, the Russian-backed authorities in Tskhinvali also wish to establish ties with the Assad government in Syria. Anatoly Bibilov says that South Ossetia is ready to provide humanitarian help and political support to Assad’s Syria, and that a visit of a Tskhinvali delegation to that country is being prepared.

Sokhumi Happenings – Khajimba offers geopolitical vision: Raul Khajimba made a speech at an event in Sokhumi, called “Caucasus in the context of globalization.” There he expressed confidence that “Russia is influencing the formation process of the new world order more and more.” Khajimba also thinks that “the Western states, who are causing a geopolitical confrontation with the Russian Federation, for centuries have been viewing Caucasus as a special geostrategic region, influencing which could weaken Russia, undermine its internal foundations and external positions. Today we also see attempts to artificially divide Caucasus geopolitically, culturally and informationally, to separate it from the gravitational field of Russia, to destabilize it internally.”

Sokhumi Happenings – Gali Georgians brought to protest against Georgia: After authorities in the Scottish city of Kilmarnock temporarily removed a monument with the Abkhaz separatist flag drawn on it, following a Georgian request and pending a decision about how to make the monument more politically balanced, Sokhumi-appointed administration of Gali district, which is populated by ethnic Georgians, sprang into action. They gathered some local residents at a Gali square to protest against Tbilisi. The district head Timur Nadaraia implied in his speech at the rally that the Abkhaz getting angry could worsen the lives of the Gali Georgians, saying that Tbilisi officials “do not think about ethnic Georgians who live in Abkhazia; the Galians do not exist for them in such moments, even though they understand that any escalation between Tbilisi and Sukhum will first of all reflect on the residents of Samurzakan [Gali district].” See video of the rally aired by a local TV channel.

Sokhumi Happenings – Insecticides sent from Tbilisi to Abkhazia disappear mid-way: Invasion of the brown stink bug is devastating farmers’ harvests in the Western Georgia, including Abkhazia. To fight the bug, Tbilisi sent the insecticides and the equipment to use them to Abkhazia, free of charge, through an international group Action Against Hunger. The aid never reached the farmers, however, disappearing somewhere mid-way under unclear circumstances. Action Against Hunger members say they delivered the aid to the Sokhumi-appointed Gali district administration.

View from Tbilisi – Ombudsman’s Abkhazia human rights report: Georgian Public Defender Ucha Nanuashvili says the human rights situation in Gali district is gradually deteriorating, citing closure of the crossing points through the occupation line from the district into the rest of Georgia, and stressing that “the closure of the crossing points, problems related to [identity] documents, restriction of the right to education in one’s native language, and other issues, amount to discriminatory treatment of the population of Gali.”

On the Line – 82nd IPRM meeting held in Ergneti: The 82nd Incident Prevention and Response Mechanism took place on November 16. The security situation on the line of control was assessed as “relatively stable,” even though “the installation of new barbed wire, fences and signs, and the way these activities are affecting people residing close to the ABL were deliberated.”

On the Line – Tskhinvali occupation line to be reinforced – again: During Anatoly Bibilov’s press conference, given by the Russian-backed Tskhinvali leader after his trip to Moscow, he said that “border with Georgia” would have to be “fully equipped, including in engineering terms.”