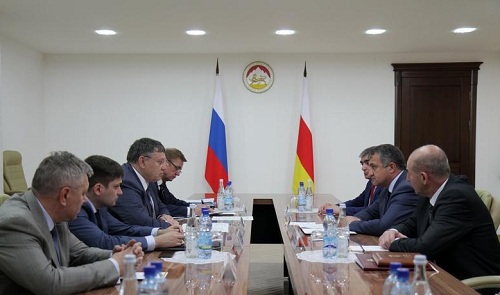 At a meeting with Tskhinvali leader Anatoly Bibilov on June 26, Russian Deputy Interior Minister Igor Zubov said that establishment of the “Information-Coordination Center of Internal Affairs Agencies” in Tskhinvali was a decided matter.

According to Zubov, only technical issues were remaining, such as overhauling and equipping the building for the Center. “The funds have been designated, they must be used this year,” he added.

Igor Zubov signed the agreement on creation of the “Information-Coordination Center” together with a representative of the Russian-backed authorities in Tskhinvali on July 4, 2016.

The purpose of the Center according to the agreement, is “countering organized crime and other dangerous types of crimes.” For that, the Center will document, analyze and exchange the crime-related information; as well carry out “inter-governmental search and extradition of persons,” and assist in conducting “the necessary agreed activities to combat dangerous types of crimes that pose threats to the security of the Republic.”

According to the agreement’s addendum, “financing of the Center’s activities is carried out at the expense of the funds provided by the Russian Federation for its maintenance.”

Russia signed a similar agreement with Sokhumi on May 18, 2017, causing controversy in the region. In Tskhinvali, however, the “Information-Coordination Center” will enjoy wider powers than in Sokhumi.