The situation in Abkhazia and Tskhinvali Region/South Ossetia was among the issues
discussed at the recent OSCE Permanent Council in Vienna, Austria, where the Georgia representative Davit Dondua spoke of the recent developments near the occupation line.

“Eleven years since the Russian military invasion of Georgia, we remain deeply concerned over the continued occupation of the territory of Georgia and underline the need for the peaceful resolution of the conflict based on full respect for the UN Charter, the Helsinki Final Act, and the fundamental norms and principles of international law,” the joint statement of 15 diplomats reads.

They called on the Russian Federation “to fulfill immediately its clear obligations under the EU-mediated 12 August 2008 ceasefire agreement, including the withdrawal of its forces to pre-conflict positions, and to reverse its recognition of the so-called independence of Georgia’s Abkhazia and South Ossetia regions.”

We remain deeply concerned over the ethnic discrimination against Georgians residing in Georgia’s Abkhazia and South Ossetia regions and about human rights abuses, including the reported use of torture, destruction of Georgian IDP houses, and gross violations of rights related to freedom of movement, residence and property. We support the voluntary return of internally displaced persons and refugees to the places of their origin in safety and dignity,” they also stated.

Condemning the death cases of Georgian citizens Irakli Kvaratskhelia, Archil Tatunashvili, Giga Otkhozoria and Davit Basharuli, the group called on “those in effective control, to enable full and unfettered access by international human rights organizations to the Georgian regions of Abkhazia and South Ossetia,” as well as urged the Russian Federation, “as the state exercising effective control over Abkhazia and South Ossetia, to remove any obstacles to bringing the perpetrators to justice.”

Although the U.S. Mission to OSCE “fully subscribes” to the joint statement made by the Group of Friends of Georgia, Ambassador James S. Gilmore III released a separate statement as well, to speak in their national capacity.

According to the statement the U.S. “fully supports Georgia’s sovereignty, independence, and territorial integrity within its internationally recognized borders, as well as Georgia’s Euro-Atlantic aspirations.” “Russia’s efforts to rewrite historical facts and create a false narrative again undermine efforts to resolve the conflict, and will not succeed,” it reads.

U.S. Ambassador also noted that “like Canada, the U.S. is troubled by reports of the resumption of installation of fencing on Georgian territory near the occupation line with Tskhinvali Region.” “The process of “borderization” unfairly affects Georgian civilians living in the area, separating them from their farmlands, family, livelihoods, and critical infrastructure,” the Ambassador said.

The European Union has also delivered a statement at the OSCE Permanent Council meeting on the situation in Georgia. It said the recent developments along the occupation line “have negatively impacted the overall security situation.”

“The European Union is actively engaged with the recent highly concerning occurrences in the Gugutiantkari and Chorchana/Tsnelisi areas. The erection of fences by the de-facto authorities of South Ossetia backed by Russian border guards hinders the freedom of movement of the local population and deprives them from access to orchards and water resources, which are key to their livelihood,” the EU statement says, urging Russia “to engage in reversing” these activities.

The EU also called on all relevant actors to continue using all existing mechanisms of communication, including the EU Monitoring Mission’s hotline and the Incident Prevention and Response Mechanisms (IPRM), noting that “dialogue to lower tensions and to address the challenges of the conflict-affected population is vital.” In this context, the EU welcomes the work in the Ergneti IPRM, and urge the resumption of the activities of the Gali IPRM “without preconditions and further delay.” 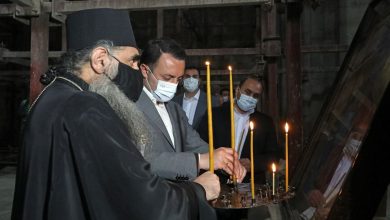 PM Says Went to Athos ‘to Detox’ After Quitting as PM

Georgia Marks 28 Years Since the Fall of Sokhumi