Back in 2008, when Russia started a war against Georgia, President Mikheil Saakashvili asked the West to help and support Georgia. The U.S. sent humanitarian aid to Georgia and the European Union helped to sign Ceasefire Agreement.

This year Georgia marks the 11th anniversary since the August War that took the lives of 412 Georgian citizens, 1,747 were injured.

In an interview with Voice of America’s Mariam Ugrekhelidze, ex-ambassadors of the U.S. to Georgia, Ian Kelly and William Courtney are remembering August war and political situation at the time of the war. Also, in an interview with VOA’s Georgian Service, ambassador of the U.S. to NATO in 2008, Kurt Volker talked about the mood that prevailed in the Western Europe and in NATO.

Ian Kelly, who worked for the State Department as the director of the Office of Russian Affairs back in 2008, says he remembers August war very clearly: “we were shocked but not surprised by the invasion: Russia had been acting aggressively ever since the NATO Summit in Bucharest.” Ambassador Kelly thinks that Russia still pursues its aggressive policy against Georgia, but Georgia has to keep going West: “Russia is still aggressive, but Georgia has the right approach: no compromise when it comes to the territorial integrity of the country. And of course, the U.S. will support Georgia as it continues on its path to the West.”

In 2008, soon after the August War broke out, on August 11, Kurt Volker went to Brussels, NATO’s headquarters, as a newly appointed U.S. ambassador to NATO. “I suggested to my NATO colleagues that we should issue NATO statement that this is a terrible tragedy, that the forces should go back to the positions they were in before August 6, that we support an immediate ceasefire and that we support the efforts of the European Union President, French President Sarkozy to negotiate a lasting ceasefire. None of my European colleagues wanted to go along with that simple statement from NATO, saying there’s no time, saying our leaders are out of town, they are on vacation, that it is too complicated. We couldn’t agree on a text. And the kicker was when one of them said well, you know, we know that Russian tanks are moving towards Tbilisi but we don’t want NATO to issue a statement because we don’t want to militarize the conflict. And that’s when I finally decided that we’re not getting through here in Western Europe. So as the U.S. ambassador to NATO it was important that we just speak up. And so I then went on television interviews and radio interviews in every Western European – Spanish, French, German, Belgian, Dutch, British – media outlet to explain what was happening and to say that we should see a withdrawal of the forces, and the ceasefire. And then two weeks later we made a trip to Georgia as well to say the same things. “

Ex-ambassador to NATO and McCain Institute director says he clearly remembers Russia preparing for a war for a long time. He says it is a fact that the Russian Federation started the August War in Georgia. Volker thinks flipping this narrative and blaming Georgia for starting the war is to justify Russian occupation of Georgian territories: “now Russia wants to perpetuate this narrative, that Georgia started the war because it justifies Russia’s continued occupation of Georgian territory. There are no Georgian forces inside Russia. There are only Russian forces on territory that the rest of the world recognizes is Georgian territory, except for Russia itself. So it’s very important to them to try to flip the narrative and that’s why it continues to be a topic. I think is important for all of us whether we were there at the time, or understood the issues or whether we’re learning about them now, not to be silent. Not to let this narrative go unchallenged.”

Like other diplomats, Russian invasion of Georgia was not a surprise for another former U.S. ambassador to Georgia, William Courtney. Even more, together with Ambassador Yalowitz, Courtney argued in an article that Russia may be provoking a war with Georgia few months before the war broke out: “in June, Ambassador Yalowitz and I wrote an op-ed in Christian Science Monitor arguing that Russia may be provoking a war with Georgia.  When war broke out, the U.S. voiced strong opposition to Russian aggression. The strength of the reaction, however, was muted to some extent by perceptions in the West that Georgia had erred at the outset by shelling civilian areas in South Ossetia. Over time, U.S. confidence in the quality of Georgia’s leadership and democracy has steadily grown.  The U.S. is training Georgian troops for territorial defense and even providing lethal weapons (Javelins).”

Courtney says Georgia needs to do more to strengthen its security. He thinks one of the ways to do is to build Anaklia Port: “investors worry that the law enforcement and judicial system is vulnerable to political pressure, for example, one of the kind now being exerted against the Anaklia consortium.  Once the deep water port is complete, Georgia could further strengthen its security by enabling Russian and Abkhaz shippers to use it for their cargo; this could also help ensure a volume of cargo sufficient to cover the costs of building and operating the port.  In case such cooperation is absent, Anaklia could be vulnerable to political risks, which in turn could raise insurance costs to shippers using the port and drive some away.”

American diplomats say that U.S. and the West should keep supporting Georgia’s democracy development and its path to the west.

European Court Verdict into Georgia vs. Russia Case over 2008 War 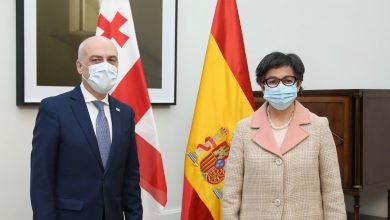