Chinese Foreign Minister Wang Yi is paying his first official visit to Georgia on May 23-25. Today, he met with his Georgian counterpart, Foreign Minister Davit Zalkaliani, pledging support to the country’s sovereignty and territorial integrity.

In his opening remarks ahead of the meeting, Wang Yi said China is ready to deepen its “traditionally friendly” relations with Georgia, adding that the visit would help the two countries explore new avenues for bilateral cooperation.

“Our firm position is that all countries are equal regardless of their size; we respect the independence, sovereignty and territorial integrity of Georgia and other countries,” the Minister was quoted as saying by the Georgian MFA. “We hope Georgia will create a favorable environment in its relations with neighboring countries, which will promote its development,” he also noted, according to the MFA.

On his part, Foreign Minister Davit Zalkaliani said the visit bears “historic” importance for Georgia. The Minister also noted that Chinese-Georgian relations are developing “dynamically” and that their cooperation in bilateral and multilateral formats is “exemplary.”

Great pleasure to welcome Minister Wang Yi in #Tbilisi. High-level contacts between ?? ??demonstrates our intention to further deepen bilateral relations. This visit will give a new impetus to strengthening our partnership and will shape our cooperation for the years ahead pic.twitter.com/uZ3gTxsALm

In its press release of the meeting, the Georgian MFA said Wang Yi and Davit Zalkaliani spoke on a range of topics, including on matters pertaining to economy – trade, investments and transportation. The sides also touched upon the participation of Georgia in the Belt and Road Initiative.

The Ministry also said the issue of Russian occupation was raised at the meeting, with Zalkaliani highlighting the “invaluable” support of China to Georgia’s sovereignty and territorial integrity. “Georgia, on its part, is loyal to the principle of One-China and this position is unwavering.”

“The visit confirmed China’s support to Georgia and the region, which demonstrates that the government of China has a clear vision on the importance of South Caucasus and the role of Georgia in large-scale transport and transit projects between Europe and Asia,” the MFA concluded.

As part of his official visit to Georgia, the Chinese Foreign Minister has also met with President Salome Zurabishvili and Prime Minister Mamuka Bakhtadze.

Georgia and China signed the Free Trade Agreement (FTA) in May 2017. 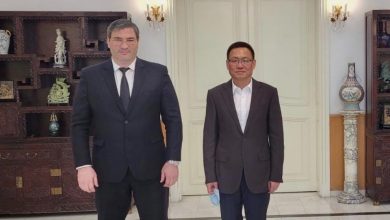