Georgian politicians and representatives of civil society organizations have commented on a new lawsuit against Rustavi 2, one of the country’s leading national broadcasters.

Civil.ge offers you these press remarks:

Assessments by the President, ruling party

Kakha Kaladze, Tbilisi Mayor: To tell you the truth, I do not know what lawsuit you are talking about. Today, we have [guaranteed] freedom of media in Georgia and TV channels, journalists face no restrictions. I can bring a lot of recent examples to prove it. We have super-democracy and super-freedom in Georgia.

MP Sophio Kiladze: I think, Rustavi 2 TV is super-free in its editorial policy. So, it was somewhat hard to understand what Gvaramia was saying yesterday. I think, it is a private [business] dispute… and linking Bidzina Ivanishvili to this issue is a political speculation.

Assessments in the opposition

Grigol Vashadze, United National Movement: Along with intimidation, vote-buying and blackmail during the by-election campaign, the so called government – Bidzina Ivanishvili’s criminal group – has launched a new attack on freedom of speech and Rustavi 2 TV… After freezing Rustavi 2’s property and following the ECHR ruling in favor of the TV channel, the so called government decided to seek revenge. Bidzina Ivanishvili’s occupation regime has only one option left – to go against the society, to increase pressure on opposition and to suppress one or two remaining voices of freedom of speech. It wants to seize Rustavi 2 with a fake lawsuit and turn it into another factory of fake news. I would like to tell the so called government that the entire political spectrum, all opposition parties, entire society will protect Rustavi 2 TV… We will use all forms of protest, including radical ones.

Davit Bakradze, European Georgia: Any lawsuit against Rustavi 2 will be perceived as continuation of an attack carried out against Rustavi 2 for years. Therefore, this lawsuit should be followed by adequate reaction from both inside and outside the country… By continuing its attacks on Rustavi 2, the government reiterates that Ivanishvili wants to see Georgia as a country, where there is no alternative opinion… The fate of Rustavi 2 will determine whether we will live in the Soviet Union of the sixties or North Korea, or whether we will live in a free country, where alternative opinions do exist.

MP Eka Beselia, independent: The government should undoubtedly show caution. Rustavi 2 has always been a stumbling block under successive governments, with changing ownership. But today’s context is very complex. Both contexts should be taken into consideration – the pending case in Strasbourg on the one hand, and on the other, critical attitudes towards the judiciary… Therefore, the ruling party should come to realize the challenges we are dealing with now; I think such experiments are very dangerous for the country.

Giorgi Gugava, Labor Party: Of course, this is related to the upcoming [Parliamentary] elections, the process which will cost a lot for Ivanishvili and his gang. He thinks he is acting preventively and trying to neutralize one of the main opponents, the bastion of truth, Rustavi 2, believing that he will maintain power with this. Let’s stand together and rally for putting an end to this government. Only in this case, we will save our country, save our people and save Rustavi 2.

Nino Goguadze, Free Democrats: It is clear for everyone that this is the government’s, to be more precise – Bidzina Ivanishvili’s war against freedom of speech. He cannot tolerate alternative opinions. All state institutions are in his hands, he has subjugated the courts, the foundation of any democracy, and is now trying to silence independent media through the judiciary.

Tamar Kordzaia, Republican Party: I have a reasonable doubt that this is in the interests of the authorities and of nobody else. It is clear that there always are government interests behind such disputes, particularly in countries like Georgia, where this has already been the practice.

Ketevan Khutsishvili, Open Society Georgia Foundation: Of course, what and why Nizharadze seeks needs to be ascertained, but unfortunately it appears to me that this serves to create preconditions for the 2020 elections, with the authorities trying to take control of the media to the maximum extent possible.

Nata Dzvelishvili, Georgian Charter of Journalistic Ethics: Developments surrounding Rustavi 2 has long become part of the political process. I do not think there is anyone in this country who thinks this is a private dispute between owners. This is not about Rustavi 2, this concerns whether we will have a critical broadcaster or not, whether there will be media outlets that are unacceptable for the government, because this is exactly what makes countries democratic.

Eka Gigauri, Transparency International Georgia: The new lawsuit raised many questions and we may even suggest that persons affiliated with the government might be standing behind it… It is important that we do everything for preserving the independent media outlet for the 2020 elections.

Tamar Kintsurashvili, Media Development Foundation: We have all the reasons to believe that there is government’s interest behind the case… They are against critical opinions; changing Rustavi 2’s editorial policy is one of the Georgian Dream’s declared purposes and it suspiciously coincided with their attempts to clear the media playing field ahead of the 2020 elections.

Namakhvani Protests Targeted in Discrediting Campaign ahead of Major Rally

Court Orders to Freeze All Assets of Rustavi 2 TV 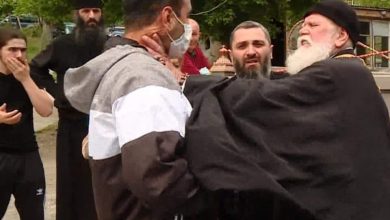