On February 28, the OSCE Office for Democratic Institutions and Human Rights (ODIHR) issued its final report based on findings of the election observation mission (EOM) during Georgia’s last direct presidential polls, with a list of recommendations aimed to “support efforts to bring the electoral process in Georgia further in line with OSCE commitments and other international obligations and standards for democratic elections.”

According to the report, priority recommendations relate to:

Responding to questions regarding the OSCE/ODIHR criticisms during her official visit to France, President Salome Zurabishvili told Le Monde she met the observers and was “one of the guarantors” for ensuring that the their recommendations are fulfilled.

Below are the detailed summaries of some key recommendations:

“To ensure that voters cast their ballot free of fear of retribution, consideration could be given to introducing a campaign silence period and an appropriate perimeter around polling stations forbidding campaigning and tracking of voters,” the report reads, noting that in second round campaign “both political forces” – ruling Georgian Dream party, that openly backed independent candidate Salome Zurabishvili, and opposition United National Movement-led coalition, supporting Grigol Vashadze – “increased efforts to mobilize voters, including in minority areas.”

“Door-to-door canvassing and small gatherings were organized daily. The ruling party and opposition acknowledged relying again on mechanism of coordinators tasked to map political preferences of voters,” the report says, adding that “numerous ODIHR EOM interlocutors reported that the ruling party coupled this mechanism with pressure and intimidation especially on public sector employees and groups dependent on state allowances.”

According to ODIHR, “instances of possible voter intimidation, pressure on public employees or vote buying should be promptly addressed by the relevant authorities,” among others, through the “appropriate information campaigns on vote secrecy safeguards.”


“The misuse of administrative resources increased between rounds. ODIHR …continued to observe the use of institutional webpages by high-ranking public officials for campaigning; no case was addressed by the authorities,” it says, noting that “while not prohibited by law, the campaign of the GD-backed candidate continued to benefit from the participation and support of numerous senior state officials from the ruling party.”

The report says, that the narrow interpretation of the law by the Central Election Commission when it comes to participation of the party-political officials in campaigning, as well as the fact that “mayors, governors and MPs representing the GD accompanied the GD-backed candidate in most rallies observed by the ODIHR EOM….blurred the line between the state and the party, at odds with OSCE commitments and international good practice.”

In its recommendations, ODIHR also urges that “to ensure a clear separation between party and state, consideration could be given to establish an effective and timely mechanism to address complaints on the misuse of administrative resources, before an impartial and competent authority and where appropriate, be able to apply relevant sanctions.”

It further underscores that “to ensure efficient oversight and transparency of campaign finance, the law should envisage expedited deadlines” for the State Audit Office “to address campaign finance violations and publish its conclusions and clearly regulate cooperation with other authorities to facilitate timely access to relevant information.”

The report also focuses on media coverage during the first and the second rounds of presidential poll, noting that “ODIHR EOM media monitoring results showed clear bias in the coverage by many private media,” and that the “lack of clear regulation for the second round led to varied interpretations of the law and limited opportunities for campaigning in the media.”

It then reiterated that in the second-round campaign, the Georgian Public Broadcaster “displayed a clear bias against the opposition candidate and did not fulfil its obligations to ensure editorial independence, fairness and impartiality of programmes, contrary to international standards.”

“The Election Code could be amended to outline explicit provisions for campaigning in the media, including the allocation of free and paid airtime, once elections are called and between rounds,” ODIHR suggests. It also urges that “the existing system for free airtime allocation, participation in debates and disbursement of funds for advertising should be reviewed to provide equal campaign opportunities. The allocation of free airtime to contestants should not be at the media’s discretion.” 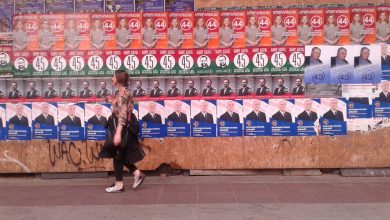