In his 45-minute interview to pro-governmental Imedi TV, aired on November 20, Ivanishvili, who was largely unchallenged by the journalists, clarified his positions on a range of ongoing issues, and outlined his plans for strengthening the ruling party.

The interview came few days before the November 28 runoff, where the GDDG-backed candidate Salome Zurabishvili will face the opposition coalition’s Grigol Vashadze.

GDDG lost touch with the people

Ivanishvili said the first round demonstrated that voters are “displeased” about the government’s performance, which he believes could be attributed to “extremely low” coordination among state institutions and his team members.

“There were problems – the vertical [of power], the team cohesion and the government-parliament relations were very weak [before my return to party politics],” Ivanishvili noted, adding that the ruling party had also “lost sensitivity to the needs of the public.”

“We have a poor economy and the government needs to show to the public that this is their government, that it shares their grievances and spares no effort to ease their problems,” he added.

“I have said in my previous interviews, that running a country through democratic means is difficult, particularly in poor countries like Georgia, but there should not never be a temptation to reject these methods; it is difficult to respect human rights and at the same time fail to ensure one of the fundamental human rights – to have a decent job,” he noted.

“The only solution in this situation is to have a strong state, but not through violence and fear as in the case of the previous government, but based on the public trust; state institutions need to enjoy high public confidence to be able to rule the country with democratic means,” he added.

Ivanishvili then detailed his party reform plans, saying he has an ambition to convince the Georgian people in one year’s time that this is a government that “truly serves the people.”

“Parties are established for serving people, and we need to fulfil all our promises … but at the same time, there should not be an illusion that we will wave a magic wand and end up having an economy of the size of Switzerland,” he added.

“People will no longer be promoted or hold positions based on their loyalty to the team; only professionalism and hard work will determine the staffing decisions. I will introduce the system and show to the public that the entire team will be put to their service,” he explained.

The party chairman also noted that one of the reasons behind Zurabishvili’s meek performance in the first round was due to GDDG’s “excess confidence.” “Teams running all branches of government, as usual become self-confidence.”

“The party was so confident in its forces that they even did not [care to] conduct professional survey polls; they carried out the surveys with party resources and such mismatch [between the GDDG poll and the actual vote] is shameful … I had a very hard talk [with party leaders] after that, their expectations were absolutely beyond the reality,” he noted.

Ivanishvili touched upon the candidacy of Salome Zurabishvili, saying she “ideally” fits the role of presidency under the new constitution.

“She is an absolutely independent candidate with her own positions, professional experience and taste … presidents in parliamentary republics should be like that; they need to be well-respected, unifying and non-partisan,” he noted.

The GDDG chair then slammed the opposition for “insulting” the woman candidate in the campaign. “It does not befit us to treat a lady like that; Georgians had always appreciated the role of women, how to respect women,” he said.

Opposition one of Georgia’s main problems

Ivanishvili spoke on the opponents as well, telling reporters that the opposition is “one of the country’s main problems.” “Like in the ruling party, there are problems in the entire political elite; in this respect, we are as poor as our economy,” the GDDG leader stressed.

“That our choice is between black and white is very bad for our society; the society has to be choosing between good and better and we have to ensure that; of course, I cannot artificially interfere in it … but our society, our political elite has to ensure that,” Ivanishvili said.

He also suggested that it was the opposition’s “nonconstructive, unjustified, unfounded” critique of the GDDG that had “indulged” the latter and “allowed it to make mistakes.”

Ivanishvili spoke on the United National Movement as well, calling it “a destructive political force that is unable to come to power through legal means, and hence, wants to destabilize the situation.”

“What they knew [best when they were in power] was deception and violence; they were creating a virtual reality – they were well-off and tried to convince others that they also were doing well… Today, they are using similar methods; they are trying to convince the society that everything is going wrong and that apocalypse is nearing,” he stressed.

Asked to describe the post-election scenario if UNM-led coalition’s Grigol Vashadze wins the runoff, Ivanishvili stressed the authorities “have [sufficient] resources to keep the process in legal, constitutional framework.” “None should have an illusion that they will manage to turn the situation upside down,” he noted.

The GDDG leader, however, stressed that cohabitation with Vashadze will be damaging for the economy. “That they will try to trigger unrest, will make the situation less stable and less predictable, and therefore, harm the country’s economy… there will be fewer investments.”

Ivanishvili believes that opposition victory will also have an impact on Georgia’s international image. “Today, Europeans and Americans know very well what UNM represents, and if we manage to bring them back to power, we will confuse our partners,” the GDDG leader noted.

For more on GDDG’s leaders recent media engagements, refer to our Tag on Bidzina Ivanishvili. 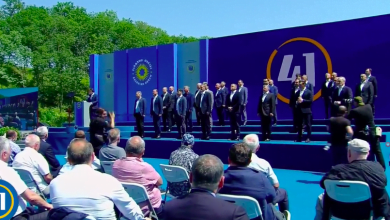