Zaza Saralidze, father of one of the teenagers murdered in Tbilisi in December 2017, and Malkhaz Machalikashvili, father of terror-related case suspect who was shot during the State Security Service (SSS) operation on December 26 last year and succumbed to his injuries two weeks later, resumed protest rallies in front of old parliament building yesterday, demanding government resignation.

The rally came less than a week after the interim parliamentary commission leading the probe into the investigation of the teen murder case in Tbilisi, which left two 16 year-olds – Davit Saralidze and Levan Dadunashvili – stabbed to death, concluded its three-month work with a report detailing investigation errors, that the ruling party refused to endorse, submitting its dissenting – and considerably milder – summary instead.

Saralidze also announced that he would go on a hunger strike until all of his demands are fulfilled, and until “justice is restored in the country.”

On his part, Machalikashvili reiterated his earlier claims about his son’s innocence. He also asked everyone to join the rally and stand together against “such cruelty” and to make sure “no similar crimes are covered up anymore.”

“I call on all of you living in Georgia to come and stand next to us to break the system and make everyone – who have committed this cruel and terrible crime – pay for what they have done,” Machalikashvili stated.

The protests in Tbilisi started mid-day on May 31, following the controversial court ruling over the teen murder case last December, which acquitted both suspects on group murder charges of Davit Saralidze, effectively defying the prosecution’s version of the incident and failing to identify the perpetrator in Saralidze’s murder case.

Chief Prosecutor Irakli Shotadze resigned on May 31, but the protests continued and moved in front of the old Parliament building in Tbilisi, where their demands radicalized and included the resignation of Prime Minister Giorgi Kvirikashvili’s government.

Temirlan Machalikashvili was one of the five citizens of Georgia who were implicated in a double operation in Tbilisi and Pankisi gorge of Akhmeta District on December 26 on charges of assisting the group of terror suspects, who allegedly plotted attacks on diplomatic missions in Georgia and Turkey.

Machalikashvili was shot in the head during the operation. According to the State Security Service, he attempted to resist the security forces and tried to detonate a hand grenade, to which the SSS operatives responded with “proportional force.” Machalikashvili’s family members deny this and claim he was asleep when the officers entered his room and opened fire. 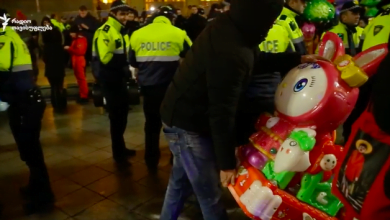