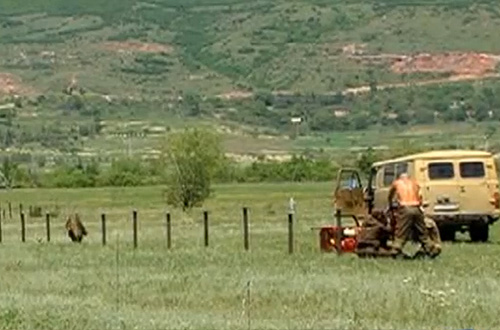 A screengrab from TV footage showing Russian troops installing fencing poles in the vicinity of the village of Ditsi close to the South Ossetian administrative boundary line on May 27.

Installation of fences by the Russian troops across parts of the South Ossetian administrative boundary line, or so called ‘borderisation’ process, is source of instability as it affects negatively livelihood of locals, Tbilisi-based foreign diplomats and representatives of international organizations were told by the Georgian interior ministry officials.

“We condemn ‘borderisation’ process as it directly undermines security and stability on the ground,” Kakhaber Kemoklidze of the Interior Ministry’s department of information and analyses told the diplomats, whom he briefed about details of the situation on June 3.

Kemoklidze, who is a long-time participant of Incident Prevention and Response Mechanism (IPRM), a body where Georgian and South Ossetian representatives meet on regular bases with the facilitation of EU Monitoring Mission and OSCE representative, says that as a result of the ‘borderisation’ process wire fences at many locations were installed deeper into the Tbilisi-administered territories.

According to the Interior Ministry ‘borderisation’ has directly affected up to 18 families, whose plots of land “partially or completely” and in some cases several houses of locals appeared beyond the dividing wire fences.

Total length of the administrative boundary line of the breakaway region is 350 kilometers; as of now about 22-25 km-long section has been marked by the Russian troops with wire fences, mainly in south, southeast and southwest from Tskhinvali, according to the Interior Ministry.

Putting barbed wire fences was first started by the border guard troops of the Russian Federal Security Service in April-May 2011, when fences were installed in an immediate vicinity of the villages of Didi Khurvaleti and Kveshi in southeast from Tskhinvali.

Kemoklidze said that at the time, like it happens now, the Georgian authorities were raising the issue during IPRM meetings and it was possible to achieve removal of barbed wire fences from the village of Kveshi, although fencing still remains in Didi Khurvaleti, where ‘borderisation’ led to moving the dividing line deeper into the Georgian-controlled territory. As a result houses of three local families, as well as half of land plot of one local resident fell beyond the fence, no longer within the Tbilisi-administered territory.

According to the Georgian Interior Ministry new wave of intensified fencing efforts by the Russian troops was started from February, 2013 and one of the most recent case occurred in the village of Ditsi, where metal fencing posts were installed in late May about 120 meters deep into the Tbilisi-administered territory, cutting locals from their agricultural lands.

In the village of Dvani, southwest from Tskhinvali, moving of the administrative border deeper into the Tbilisi-controlled areas resulted into cutting of local residents from irrigational water supply, according to the Interior Ministry official.

Kemoklidze said that Russian officers on the ground and representatives of the de facto authorities in Tskhinvali told their Georgian interlocutors that ‘borderisation’ would continue citing “a direct command coming from very high Russian military officials.” He also said that the Georgian side was told ‘borderisation’ process was “negotiable” if the Georgian side agreed on, what Tskhinvali and Moscow call it, “border demarcation and delimitation talks with South Ossetia.”

He said that situation was further complicated by frequent cases of detentions of Georgian citizens by the Russian troops for, what they call, “violation of the South Ossetian border.”

According to the Interior Ministry, total of 78 Georgian citizens have been detained since the beginning of 2013. In “most of the cases”, detained persons were released after being fined by the authorities in Tskhinvali with about 2,000 Russian rubles (up to USD 63), Kemoklidze said. Only in April-May of 2013 total of 60 Georgian citizens were detained by the Russian border guard troops; 39 of them were detained while collecting jonjoli. in the vicinity of the administrative boundary line, according to the Interior Ministry official. Cases of detentions usually increase at this time of year, during jojoli season.

The Interior Ministry has invited Tbilisi-based foreign diplomats to pay a field visit at some sections of the administrative border, in particular in Ditsi, Didi Khurvaleti and Gugutiantkari villages on June 7.

Sergey Kolbin, head of the breakaway region’s border guard service, said last week that the Russian border guard troops from the Federal Security Service were in charge of protection of “the South Ossetian state border” and were installing border infrastructure, including fences to mark “the state border”. Authorities in breakaway region deny that there was a shift of the line deeper into the Georgian-controlled areas and say that “the state border” is marked in line with the Soviet-old administrative borders of the former autonomous district of South Ossetia.

“Attempts to heat up the situation with an aim at pre-election campaign in Georgia and especially passing the buck on the Russian Federation are illegitimate,” the Russian Foreign Ministry said.