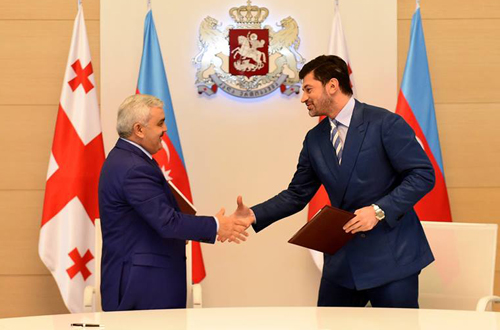 Kaladze and president of Azerbaijan’s state energy company SOCAR, Rovnag Abdullayev, signed an amended version of the 2011 agreement in Tbilisi on March 4. An amended version of a separate agreement from 2012 was also signed on the same day between chief executives of the Georgian state Oil and Gas Corporation and SOCAR Gas Import-Export.

“We have signed an agreement, which will secure stable gas supplies to Georgia,” head of SOCAR, Rovnag Abdullayev, said at a joint news conference with the Georgian Energy Minister Kakha Kaladze.

Kaladze said that because of significantly increased gas consumption in Georgia over the past several years, the country had been seeking for additional supplies.

“As a result of productive works and series of negotiations, our partner – Azerbaijani government and SOCAR leadership took the decision to provide this additional gas supply from Shah Deniz pipeline,” Kaladze said, referring to the pipeline, which transports gas from Shah Deniz offshore field in the Caspian Sea to Turkey via Georgia.

“As a result, our country will be able to get additional of 500 million cubic meters of gas from Azerbaijan in coming years,” he added.

Kaladze said that “there were technical problems with import of additional gas volumes” from Azerbaijan, “but thanks to SOCAR’s tireless efforts it was made possible” to solve it and the additional gas will be supplied to Georgia via Shah Deniz pipeline. 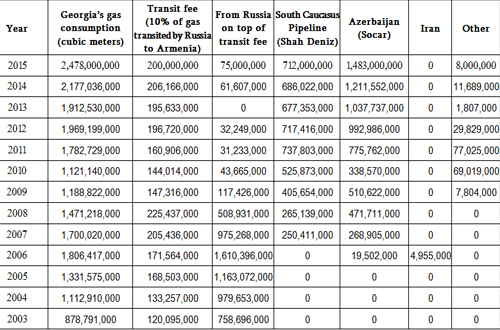 Breakdown of Georgian natural gas consumption and imports per year and per source of supply in cubic meters between 2003 and 2015. Data for 2015 are preliminary. Source: Georgian Energy Ministry

Last autumn the Georgian Energy Ministry said that it was considering import of additional gas from Gazprom on top of what the country was already receiving from the Russia’s state-controlled energy giant. Later the ministry said that talks with Gazprom involved terms for transit of Russian gas to Armenia via Georgia and possible purchase of additional gas from Russia.

As a transit fee, Georgia now gets 10% of Gazprom gas transported to Armenia; Gazprom wants to monetize transit fee and pay cash.

If monetized, Georgia is not likely to receive enough cash to buy the amount of gas it is now receiving as a transit fee; in such case the country was facing the need to buy more gas from Gazprom and the price was also part of the negotiations.

But after announcing about additional gas supplies from Azerbaijan, Energy Minister Kaladze said on March 4: “There is no need for additional volumes of gas [from Russia] at this stage – Georgia will have secured natural gas supplies in coming years.”

Late last month Deputy Energy Minister Mariam Valishvili, citing international practice, was saying that Georgia was not against of monetizing transit fee “in principle”, but it depended on amount of fee, which, she said, was still a topic of negotiations with Gazprom.

Also after securing additional gas supplies from Azerbaijan, Tbilisi appears to be better positioned to insist on keeping existing transit terms with Gazprom – 10% of gas transported to Armenia.

“The most recent proposal that we have sent to Gazprom involves keeping existing arrangement – paying transit fee in a form of 10 percent of gas transported [from Russia to Armenia via Georgia],” Kaladze said on March 4.

Asked if the agreement with SOCAR was made possible also because of Gazprom’s proposal to sell gas to Georgia for a lower price, Kaladze responded: “That might be the case – competition is always an important factor in any sector and I think that the result that has been achieved should be welcomed.”

On possible gas supplies from Iran, Kaladze said that it was one of the options at the time when Georgia sought additional sources of gas supply.

“Theoretically it’s possible to get gas from Iran, but today there is no such need any more. We have an agreement with our strategic partner, Azerbaijan, which secures supplies of gas for Georgia,” Kaladze said.

“At the same time we should take into consideration that in 2018-2019 when second phase of the Shah Deniz project is completed, Georgia will be able to receive further additional volumes of gas,” he said. “At the same time, it is important that this year we are launching construction of gas storage facility.”

Last week the United National Movement (UNM) opposition party announced about intention to hold a protest rally on March 6 in Tbilisi against what it calls is dubious goals pursued by the Georgian government in talks with Gazprom.