On the eve of her visit to Georgia, Odile Renaud-Basso, President of the European Bank for Reconstruction and Development (EBRD), granted this interview to Civil.ge, discussing the key efforts of the Bank to support Georgia’s development.

Odile Renaud-Basso was elected the President of the European Bank for Reconstruction and Development (EBRD) in October 2020. She is the first-ever woman head of a multilateral development bank.
Prior to taking over the role, she served as the Director General at the French Treasury overseeing the development of France’s economic policies.

She has an illustrious career: serving the Vice President of the European Economic Financial Committee, deputy to the G7 and G20 groups, and French Governor and Alternate Governor of the World Bank, EBRD, and the African Development Bank. She has also been the Deputy Director-General of the Caisse des Dépôts, a large French public financial institution.

Your annual report says EBRD has invested €4.3 billion in Georgia since the start of its operations. To make it more tangible for our readers: what are the specific things Georgian citizens wouldn’t have had if it were not for your Bank’s investments?

This month, EBRD celebrates 30 years in Georgia, and I am delighted to note that since the publication of the report you mentioned, our investments in Georgia have now neared the €5 billion mark, in 270 projects to date. We have had some remarkable achievements in Georgia where our main focus has been on private sector competitiveness, small and medium-sized enterprise growth, the resilience of the financial sector, energy efficiency, renewable energy, and sustainable infrastructure.

One of the milestone projects from the past we are proud of is our participation in the rehabilitation of the Enguri hydroelectric power plant, which today amounts to 40% of Georgia’s power generation. More recently, we have also had some remarkable achievements in strengthening the country’s sustainable infrastructure.

For instance, Tbilisi was one of the first cities across our countries of operation to join our successful Green City program. We helped Tbilisi to improve municipal transport, its reliability, safety, and efficiency through our financing of new, greener buses. Other Georgian cities followed suit, with the EBRD financing the acquisition of more than 500 new low-floor buses in Tbilisi, Gori, Kutaisi, Poti, Rustavi, Telavi, and Zugdidi. This has also benefited the environment by considerably reducing GHG emissions.

There have been many other impactful investments in many areas, but we are also engaged in policy dialogue, technical cooperation, and advisory programs too. We are one of the key facilitators of the growth of small and medium-sized enterprises in Georgia. Only from 2016 to 2021, SMEs advised by the EBRD increased their sales, creating a total of €144 million of additional turnover. 61 percent of these SMEs hired more employees, creating a total of 3,531 new jobs during that period.

There are so many projects and programs worth mentioning here… But to summarise our 30 years of operations in Georgia, I can tell you that we are proud of what we have achieved together. The feedback and results we are getting from Georgia fill us up with confidence that our fruitful cooperation will bring even more tangible results to Georgians for the years to come.

Your Country Strategy 2021-2026 was obviously drafted before the start of the full-scale Russian invasion of Ukraine. What are, in the Bank’s assessment, the potential impacts of this ongoing war on Georgia? Do you consider them serious enough to revise and amend your country strategy? Will some of your projects be affected (for example, you noted the development of the North-South transport corridor as one of the infrastructural priorities in the preceding period)?

First, let me clarify the Bank’s position on the issue. We stand shoulder to shoulder with the people of Ukraine and we condemned the invasion within hours of it happening. We deplore the human suffering this war is causing as it strikes at the very core of the values we have stood for in the 30 years since our founding.

We are supporting Ukraine and its real economy when the country needs it most, in the here and now. We launched our resilience and livelihoods program for Ukraine and affected countries by the crisis and intend to undertake at least €1 billion of activity in Ukraine itself this year, in cooperation with donors and other partners.

The war has changed many things in the region. What has not changed, however, is our commitment to Eastern Europe and the Caucasus, where we believe our trademark business model of investment combined with policy engagement and technical cooperation can continue to deliver real change in the region.

During the Covid-19 pandemic, the Bank remained highly active in the region, and despite new challenges, we have managed to keep up the momentum. Consequently, our existing tools proved to be ample for current regional challenges. Compared to last year, we are doing a lot more – our bankers are busier than ever, and our office in Tbilisi has expanded considerably.

In Georgia, we have observed that economic growth has been higher than expected due to unexpected short-term factors including higher net inflow of money transfers from Russia, and higher than expected income generated from tourism. But our focus remains on ensuring medium and long-term resilience by supporting local financial institutions, small and medium-sized enterprises, sustainable infrastructure, but also by increased investment in renewable energy.

If we look at the data, Georgia lags very significantly behind the OECD average in labor productivity, is quite significantly behind the EBRD average, and is even somewhat behind its regional neighbors, Armenia and Azerbaijan. What are, in your assessment, reasons for this particular shortfall, and what you and your partners are doing to redress the situation?

We understand that labor force skills are out of step with the evolving needs of businesses, which is becoming one of the main obstacles facing the private sector’s competitiveness. To improve workforce skills, weaknesses in the education system must be addressed and skills mismatches eliminated by strengthening national technical and vocational education and training, among others. Addressing other persistent inclusion issues, such as gender disparities and regional differences, is also very important.

One of the mechanisms that we provide to address these issues is the Investment Council, a platform for public-private dialogue to identify businesses’ and investors’ key challenges, and delivering the necessary reforms to address them. Together with the UK Good Governance Fund, we are working through the Council to connect the business community with key political decision-makers, and to work towards the improvement of the business and investment climate in Georgia.

We are doing everything we can to boost the productivity of the Georgian economy through our advisory programs, and we have achieved some noteworthy results. Between 2016 and 2021, EBRD-supported training programs helped 1,426 individuals enhance their skills. With the support from our donors, and through our partner financial institutions, we provide credit lines and programs for micro, small and medium-sized enterprises that support Georgia’s labor productivity improvements. But of course, there is still a lot to be done.

One of your major investment portfolios has been in the energy sector. Georgia saw last year unprecedented protests against the construction of Namakhvani HPP, yet, as your strategy points out, development and diversification of the energy generation, and upgrade of infrastructure, are crucial drivers for improved economic performance. What does your experience in other countries teach you – what are the best ways for sustainably reconciling popular concerns with economic imperatives?

We are here to help Georgia build a green, low carbon, and resilient economy through investments and policy dialogue and we are currently investing with a number of domestic and international private investors in a variety of renewable projects. At the policy level, among other projects, we have helped Georgia develop its energy efficiency legislation. Our work contributed to an estimated 9% decrease in the energy intensity of Georgia’s GDP, which is now well below world and regional averages.

With regards to Namakhvani HPP, we would like to stress that the EBRD was not involved at any stage of this project. As for our experience, we can speak only for the EBRD. All our projects are subject to thorough due diligence which goes well beyond mere business considerations. Our projects also have to pass a multi-layered vetting and approval process before final sign-off by our shareholders, i.e. the governments owning the EBRD.

Our involvement does not stop there: the Bank’s Environmental and Social Department consistently engages in careful monitoring and investigation. It also remains responsive to all stakeholders until the completion of the project. Our mechanisms are constantly evolving, and we are confident that they are up to the standard to address any environmental, social, and public disclosure concerns in a timely manner in both, larger and smaller projects.

Therefore, we are set to continue to explore the opportunities to invest in renewables, be it small and medium-sized hydro, solar, or wind power plants. For instance, we are currently working on investing in the construction of a large wind power plant.

Let’s speak governance for a moment: your politico-economic analysis shows that while Georgia lags behind the EU, it is still doing fairly well in government effectiveness, control of corruption, and even the much-criticized rule-of-law scores, especially when compared to EEC region. Many Georgians probably hold a more critical view than your analysts do. What is Georgia doing right, and where do you think are the most damaging shortfalls in governance, in your mind?

We support Georgia in its European ambitions and welcome the decision of the EU in June to recognize the European perspective of Georgia and to grant it the status of an EU candidate country once it addresses the priorities specified in the Commission’s Opinion.

It is now for Georgia to use this historic chance and to implement the outlined priorities through an inclusive reform process. The required reform steps are set to improve the investment and business climate.

We are helping Georgia to close the gaps you mentioned and to improve the general investment climate. We are complementing our investments with support in the policy reform through direct dialogue and through the Investors Council. We are also engaged in technical cooperation projects, and targeted investments, including the EU Eastern Partnership Flagship Initiatives.

By the way, before my departure, I held a virtual meeting with a diverse group of Georgian civil society representatives where we discussed wide-ranging issues, including Georgia’s aspirations toward EU membership.

Georgia’s Foreign Trade Up 36.6% in January-August 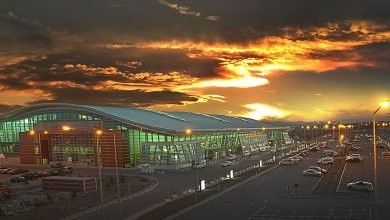 Study Shows 23% of Georgian Population has Emigrated in a Decade