Georgia and the U.S. have signed a Bilateral Concept document to guide the execution of the Georgia Defense and Deterrence Enhancement Initiative (GDDEI), the key framework for security cooperation between the countries.

The new document was signed on May 20 during the annual U.S.-Georgia Bilateral Defense Consultations in Tbilisi, by First Deputy Georgian Defense Minister Lela Chikovani and Laura Cooper, the U.S. Deputy Assistant Secretary of Defense for Russia, Ukraine, and Eurasia.

“By signing this document today, what we are doing is making a concrete plan to be able to deepen our bilateral relationship and really, greatly enhance the capabilities of the Georgian Defense Forces to bring them to a new level of excellence,” the Deputy Assistant Secretary said afterward.

She also dubbed the GDDEI itself a “watershed moment for the U.S. and Georgia,” recalling the launch of the initiative in October 2021, during U.S. Defense Secretary Lloyd Austin’s trip to Tbilisi.

Deputy Defense Minister Lela Chikovani on her part said the concept document would allow Georgia to increase its defense and deterrence capacities over the scope of ten or more years.

Also on May 20, the U.S. Defense Department official met Georgian Defense Minister Juansher Burchuladze, with the sides discussing bilateral cooperation as well as the security environment in the region, the Defense Ministry reported. 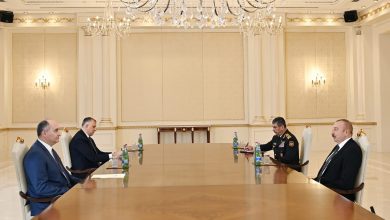