A new study unveiled by the Friedrich Ebert Foundation (FES), Tbilisi-based Georgian Foundation for Strategic and International Studies (GFSIS — Rondeli Foundation) and Moscow-based Institute for Comparative Social Research (CESSI) has shown that people from Russia’s North Caucasus have a much better attitude towards the Georgian people and the Georgian state than the national average in Russia.

This article tracks study carried out by CESSI in Russia, during which a telephone survey of the general Russian population was undertaken based on a representative probability random sample of the population over 18 with an effective sample size of 1506 interviews in 8 federal okrugs of Russia. Boost interviews were conducted in 5 North Caucasian republics – Dagestan, Chechnya, Kabardino-Balkaria, North Ossetia-Alania, and Ingushetia, with about 300 respondents in each republic, accounting for 1513 interviews in total. The survey was conducted from February 10 to March 6, 2021. The standard sampling error is +/-2.6% for the national Russian sample and +/-5.1% for the sample in each of the republics. In addition, 8 focus groups were conducted online with representatives different socio-demographic groups and regions. In this article, Civil.ge refers to data from the North Caucasus only.

While a very positive or rather positive attitude towards Georgians nationally stands at 38% in Russia, the figure stands at 63% in Chechnya, 61% in Ingushetia, 51% in Dagestan, 50% in Kabardino-Balkaria and 47% in Ossetia.

In Chechnya and Dagestan, older generations hold more positive views of Georgians, while the trend is the opposite in Kabardino-Balkaria and Ossetia.

According to the study, the differences in attitudes in these republics towards the Georgian state on the one hand, and Georgian people on the other, are smaller than in Russia overall. Differences are almost negligible in Dagestan and Chechnya, and somewhat larger in Ingushetia and Kabardino-Balkaria. In North Ossetia, the difference is most marked, where 47% have positive feelings towards Georgians, and only 38% have positive attitudes towards the Georgian state.

The study found that while large parts of those surveyed in the North Caucasus are rather indifferent towards the idea of Georgia joining the EU, notable differences between residents of the five republics remain. Chechens are more likely to view Georgia’s EU membership positively or rather positively, with 42%, followed by Dagestani people – 39%, the Ingush – 38%, Kabardino-Balkars – 31% and Ossetians – 26%.

Notably, younger generations have significantly more positive attitudes towards Georgia joining the 27-member bloc than the older generations. For instance, in North Ossetia – 42% of the 18-34 age group expressed positive views, while the figure stood at 19% and 20% for 35-45 and over 55 groups, respectively. Youngsters aged 18-34 from Dagestan, with 52%, are more likely to view positively Georgia’s EU membership, than any other age groups in any of these five republics. 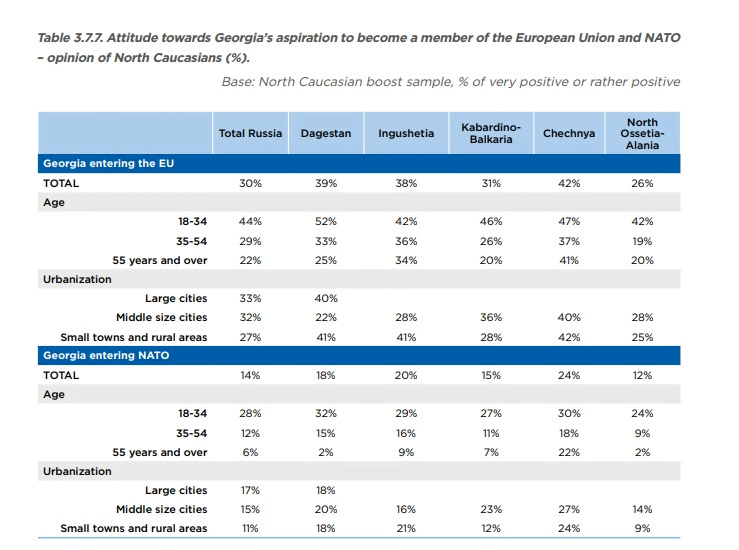 Positive attitude towards Georgia’s NATO membership in the North Caucasus is less than that of the EU, according to the study, but youths are significantly more likely to favor the idea, than older generations. Chechens, with 24%, top the list of having positive view towards Georgia’s NATO accession, followed by the Ingush – 20%, Dagestani – 18%, Kabardino-Balkars – 15%, and N. Ossetia – 12%.

According to the survey, large part of respondents in Kabardino-Balkaria, Dagestan and N. Ossetia expects Abkhazia and Tskhinvali regions to be part of Russia in the future more often than in other Russian regions.

About 40% of the residents of Kabardino-Balkaria, Dagestan and N. Ossetia expect that in the future, Abkhazia will become a part of Russia. About half of the respondents in Ingushetia and Chechnya, the survey said, hesitated to express their opinion about the future of Abkhazia.

Only a small part of respondents in all republics expected the return of Abkhazia to Georgia – ranging from 2% in Kabardino-Balkaria to 8% in Ingushetia.

As for the future of Tskhinvali Region, 54% of respondents from N. Ossetia expect the occupied region to become part of Russia, while 47% of intervieweees from both Kabardino-Balkaria and Dagestan have the same expectation. About 40% of the respondents in Ingushetia and Chechyna hesitated to express their opinion in this context.

In the case of Tskhinvali Region, also only a minor part of the respondents expected the return to Georgia, ranging from 2% in N. Ossetia to 9% in Ingushetia.

The survey focus groups showed that the awareness of North Caucasian inhabitants about the conflict in South Ossetia is very low – lower than about Abkhazia.

According to the survey, a large part of focus group participants knew very little about Russian-Georgian conflicts and had not formed an opinion about them. Those few respondents that were more informed, expressed a negative opinion about involvement of Russia in the conflicts.

GD MP Hits Out at MEPs over ‘Groundless, Unfair Antics’