Screening of Brighton 4th, a film by Georgian director Levan Koguashvili, opened Tbilisi’s 22nd International Film Festival on December 5. The movie, featuring the struggles of Georgian emigres, swept some international prizes. But it is not the only critically acclaimed homemade production the organizers promise to showcase this year.

The pandemic-induced lockdowns had limited the country’s most important movie event to online meetings last year, and the organizers had to skip the national filmmaking. But now, in part due to scarcity of foreign filmmaking owing to the same pandemic, the festival features the abundance of Georgian films.

One of the key highlights is Aleksandre Koberidze’s What Do We See When We Look at the Sky? A fantasy- and romance-loaded novel, shot in the western Georgian town of Kutaisi, follows a story of a young couple. The two get thunderstruck by love, only to wake up in completely different bodies one nice morning. They spend the movie trying to find (and recognize) each other again. The German-Georgian co-production earned positive reviews and was shortlisted at the Berlin International Film Festival – the first Georgian movie since Temur Babluani’s legendary Sun of the Sleepless (Udzinarta Mze) to clear that hurdle.

“A true sensation not only in Georgian but also in the [entire] cinema of the recent years,” film critic Theo Khatiashvili tells Civil.ge about Koberidze’s film. “An exceptionally original work with its playfulness, fairy-tale charm, extraordinary dramatic composition, much air and space in shots, captivating and memorable faces,” she says, noting that the film transports the viewers, just like the old reels “when cinema was still regarded as a miracle. [It] gives you back the sensation of amazement and excitement.”

Khatiashvili further recommends Otar’s Death, a drama shot by young Georgian director Soso Bliadze. The film follows a mother story who tries to save her teenage son from a prison sentence. The movie, the critic says, overlaps with “today’s drastic social environment and emotional problems of the youth, reflected in the depressive atmosphere and complete hopelessness.”

For an “overly grave social portrait of the present,” the film critic also suggests viewing Dead Souls’ Vacation, a “very intimate” documentary directed by Keko Chelidze that looks into the current life of Levan Svanidze, a member of the music band Tserili, very popular in the 1990s. Being a part of “ongoing interesting processes in the documentary,” the film is shot in Tbilisi city outskirts where Levan shares a tiny apartment with his mother, making “two protagonists.”

Those into no less surreal-looking nonfiction with an insight into the hotly discussed contemporary history of Georgia may turn their eyes to Salome Jashi’s internationally acclaimed documentary Taming the Garden.

The eye-catching documentary, rich in symbolism, draws on the controversial – and eerily surreal – episode from the recent history, when billionaire Bidzina Ivanishvili dug up century-old trees from the Georgian coastline and moved them to his private – but publicly accessible – Shekvetili Dendrological Park. Ivanishvili is also incidentally the patron and founder of the Georgian Dream, Georgia’s ruling party.

And this is not all. This December, the competition section will be entirely dedicated to Georgian cinema, with nine feature films, nine documentaries, and eighteen short films competing in three respective categories where an international jury is to decide winners.

Amirani Cinema is hosting screenings of more than 80 Georgian and international films, part of them in several sessions due to virus-related safety precautions. The jury will announce the winners during the closing ceremony on December 11.

The International Film Festival, taking place in December, culminates the year believed to be particularly successful for Georgian cinema. 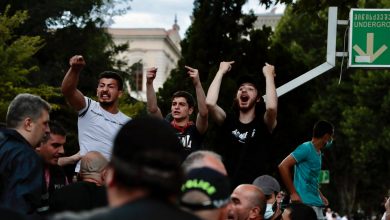