According to the new Future of Georgia opinion poll released today, the overwhelming majority of Georgians (78%) support the country’s integration into the European Union, with the public supporting EU membership not only for economic, but cultural reasons. Yet, ambivalent attitudes persist, with two out of five respondents reckoning the EU poses threat to Georgian culture.

The nationally representative survey is part of the “Future of Georgia” project run by Carnegie Europe and the Levan Mikeladze Foundation in Tbilisi, supported by the government of Sweden, and carried out during September 10-28,2020, by the Caucasus Research Resource Centers (CRRC) Georgia. The survey sample size is 1,928 respondents, and it has a margin of error of plus/minus 2.2%.

69% of respondents agree or agree strongly that the wars Georgia was involved in since it regained independence in 1991 from the USSR show the need for greater tolerance toward ethnic minorities. 22% disagree or disagree strongly with the statement. The public is roughly split on the statement that ethnic and linguistic minorities are “a potential security threat” for Georgia as shown by the separatist wars in Tskhinvali Region/S.Ossetia and Abkhazia. 47% agree, while 42% disagree with the statement.

According to the poll, 57% think that armed conflicts in Abkhazia and Tskhinvali regions in the 1990s were avoidable, with only 18% disagreeing and 23% being undecided over the statement. As for the 2008 Russo-Georgian war, 55% disagreed that everything possible was done to avoid the war, and 28% agreed.

67% of the respondents seem to identify themselves more with their citizenship, while 16% considered their ethnicity to be more important. Another 15%, however, claimed both identities are equally significant for them. According to the data, younger people from rural settlements are more likely to prioritize ethnic identity over citizenship. In this context, 47% disagree, and 20% disagree strongly that only ethnic Georgians should be allowed to be Georgian citizens. Only 21% agree that Georgian citizenship should be exclusively granted to ethnic Georgians; 9% strongly agree to the latter.

69% of those surveyed believe having more LGBTQ people in the Georgian Parliament would have a negative impact; 14% claim this would have no impact, and only 4% think the impact would be positive.

According to the survey, 62% approve of the special legal status granted to the Georgian Orthodox Church (GOC) by the Georgian Constitution, while 19% disagree, and 17% are undecided. 80% agreed that the GOC “promotes the preservation of moral values in Georgian society,” and 79% said, “the GOC is the foundation of Georgian identity.” 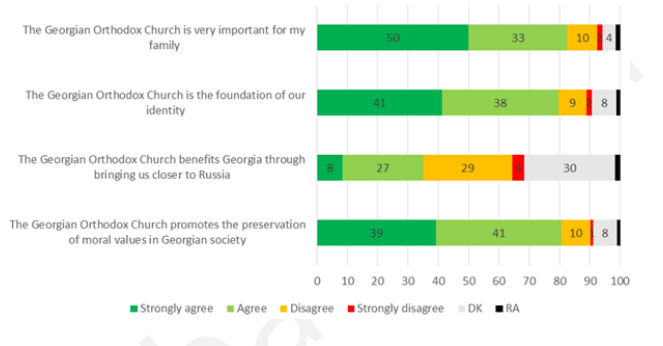 However, respondents were split on whether or not the GOC benefits Georgia “through bringing us closer to Russia,” with 35% either agreeing or agreeing strongly, and 33% disagreeing or strongly disagreeing; another 30% said “don’t know.”

Attitudes on the West, Euro-Atlantic Integration

The survey data show that 39% of the public thinks the European Union “can best support Georgia,” followed by the U.S. (24%), and Russia (13%). 15% said none of these countries/unions can support Georgia, while 8% are undecided.  Noteworthy that ethnic Georgians are more likely to view the EU or the U.S. as Georgia’s best supporters, while ethnic minorities named Russia more often.

78% supported Georgia’s integration into the EU, while 14% were against it, and 8% did not know or refused to answer. The survey also found that ethnic minorities are less likely to support Georgia’s EU membership with 53% being against, while a majority of ethnic Georgians (82%) want Georgia to join the 27-member bloc.

Asked about the potential tradeoffs between Georgia’s Western integration and regaining control over Abkhazia and Tskhinvali Region, 78% of the respondents opted for regaining control; only 13% preferred NATO and EU membership, and 7% were undecided.

According to the survey, the public names Russian anti-western propaganda, and confrontation over the status of Abkhazia and Tskhinvali Region to be the two key hindrances to Georgia “in becoming closer to the European Union,” with 42%, and 48%, respectively. 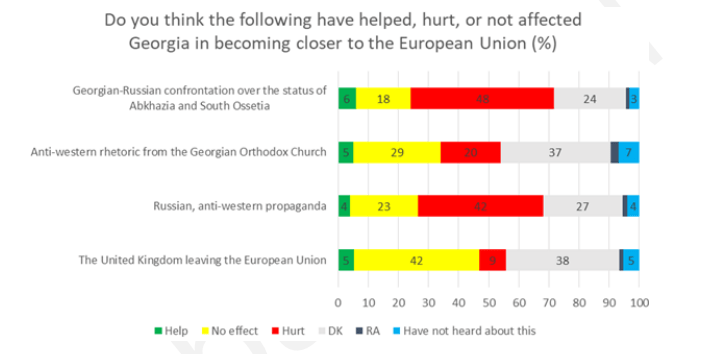 Asked whether the EU threatens Georgian traditions, 50% of the public disagrees that it does, while 39% said they think Georgian traditions come under threat; another 11% reported that they didn’t know. People with higher levels of education showed to disagree with this statement more, according to the survey findings.

Views on Recent Past

The poll shows that 64% of the Georgian population thinks the collapse of the Soviet Union “was a good thing for Georgia.” 28% of respondents did not agree with this statement, and 9% had no response/refused to answer. Tbilisites, younger people, those with higher levels of education, and those with more wealth were “more likely to view the collapse as a good thing.”

The public, according to the survey, views fighting crime/establishing law and order, as well as economic development as the largest successes of the United National Movement administration of 2004-2012, with 24% and 23%, respectively. Most respondents named human rights abuses (27%) and failing to prevent the 2008 Russo-Georgian war (25%) as the key failures of the UNM government. 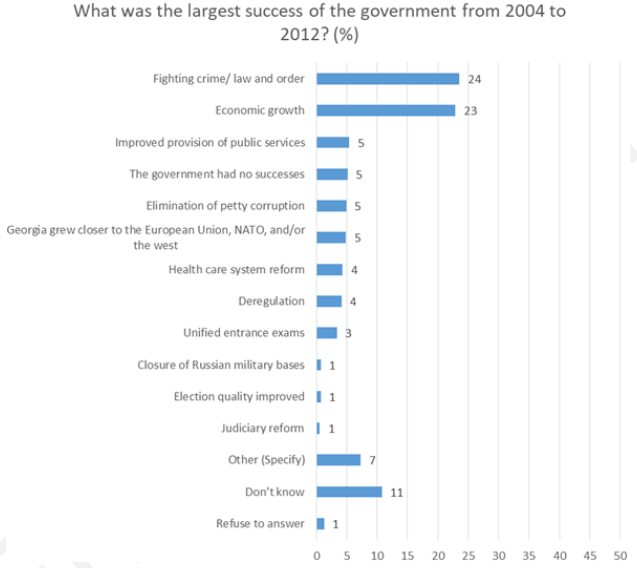 As for the Georgian Dream government, 21% said the current ruling party “had no successes” since 2012, while the second most common response was “don’t know” with 13%, followed by improved human rights protections with 11%. The survey also found that the public views weak economic growth as the largest failure of the GD government (26%), followed by failure to deliver on election promises (9%), “Gavrilov nights” (8%), and failure to accomplish the restoration of justice  (8%). 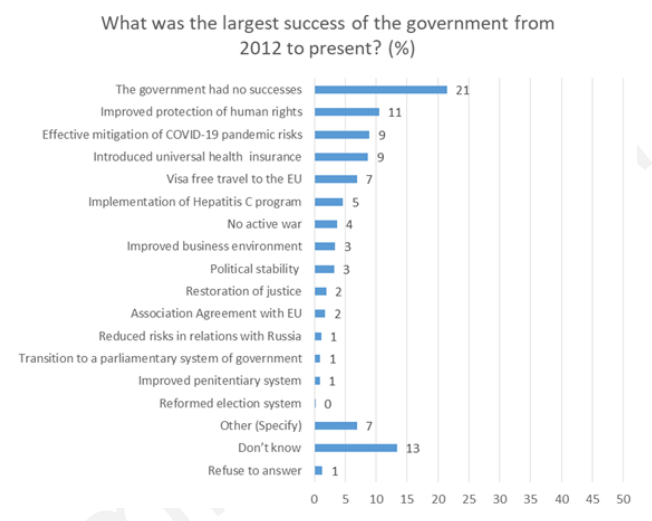