Georgian Dream parliamentary faction chair Mamuka Mdinaradze said Lomjaria “will have to” substantiate her “emotional” statement and “the motives behind it” in the Georgian Parliament.

Vice-Speaker Gia Volski also weighed in, saying Public Defender “better desist from [making] emotional statements,” and instead assess legal matters – whether police used excessive force during the raid, or if the Court made the “correct decision” to detain Melia.

Lomjaria responded to MP Volski during her visit to the UNM headquarters after the raid: “Yes, I am, among others, the United National Movement’s defender, because the Ombudsperson shall first defend those who need protection the most. Today, I think, the opposition and especially the UNM are in need of protection.”

Georgian Dream lawmakers, including Gia Volski, “do not know” what the Public Defender is mandated to do, Lomjaria further remarked later, as she arrived to visit Nika Melia in Rustavi Prison. 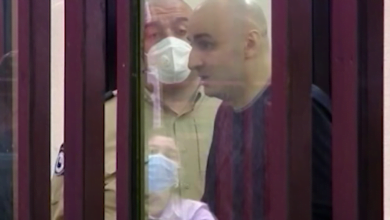