Georgia has been striving for its European future since the very first day of independence. Shared values and positive dynamics in our relations made us strategic partners with the EU. The EU is an important contributor to the security and economic and democratic development of our country. In return, Georgia has proven to be a trustworthy and reliable partner for the EU. Now it is time to prepare for the final, decisive step. 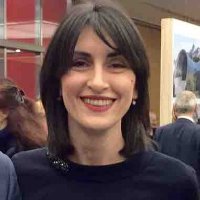 has joined the Georgian Dream party list. She has served in the diplomatic service of Georgia for more than 20 years, most recently as Deputy Head of Mission in Brussels and Vienna. Follow her on Twitter at @MakaB__

My journey to the presentation of the Georgian Dream’s electoral list began at Europe Square in Tbilisi on September 10, 2020. That was a very symbolic place for a Georgian diplomat, just returned from Brussels, to enter Georgian politics. Right after the presentation of the renewed Georgian dream team, we shaped the party platform and defined EU membership as the main driver for the further development of our country.

There is no turning back in Georgia’s ambition to become a member of the EU. In 2018 the Parliament of Georgia amended the Constitution and turned the European and Euro-Atlantic integration into a legally binding goal for all institutions, thus creating constitutional safeguards for Georgia’s European future.  The main objective for Georgia’s ruling party for the next four years is to submit a formal application for EU membership in 2024. At the same time, how the EU responds to this aspiration is crucial. While the EU is currently facing numerous challenges, the most important question is how to turn the European dream of the Georgian people into reality?

Before discussing future steps, let’s first consider developments in the partnership between the EU and Georgia since the Georgian Dream came to power. There was no honeymoon period with the EU at the start of the Georgian Dream’s leadership in 2012. During the first years, the government spared no efforts to move Georgia to the next level of partnership with the EU. The signing of the groundbreaking Association Agreement in 2014 created a solid legal framework for Georgia’s European ambition. In 2016, Georgia successfully passed another test of its democracy by conducting free and fair parliamentary elections that resulted in pushing forward the implementation of the next wave of reforms. This made our country the evident front-runner in the EU’s eastern neighborhood. In 2017, with the successful completion of all commitments, the government succeeded in achieving visa-free travel for Georgian citizens within the EU. The Association Agreement together with the DCFTA and visa-free travel with the EU provided a unique opportunity to shrink the distance between the EU and Georgia and to bringing our people closer to each other.

Now, when the two most significant objectives in the relationship with the EU have been successfully achieved, we need to define a new benchmark for the coming years.

There are several key events ahead that will have a profound impact on the future nature of the EU-Georgia partnership. First and foremost are the parliamentary elections scheduled for October 31, 2020. Elections are essential in any democracy. The ruling party understands very well the importance of free and fair elections conducted in accordance with international standards. To this end, a number of legislative changes have been recently adopted that have been positively assessed by the international community. Free and fair elections will further represent another step forward in consolidating democracy in Georgia and contribute greatly to strengthening the EU-Georgia relationship. Later this year, we need to update the association agenda and develop a large scale plan for further implementation of the EU-Georgia Association Agreement starting from 2021.

Another important milestone is the Eastern Partnership Summit planned for spring 2021. This critical summit will define the vision and the next set of deliverables for the EaP. Fundamental internal and foreign policy differences between the six EaP countries will definitely be a challenge in designing a common ambitious agenda. EU’s support for the European aspirations of the associated partners will be critical. Based on the principle of differentiation, we need to solidify our institutional rapprochement with the EU together with economic integration into the European single market. That will definitely be a game-changer in the region. To this end, we need to closely engage with the EU to find ways to design proper instruments for associated partners similar to the ones developed for western Balkan countries. Stronger European engagement in countering Russian aggression will contribute to sustainable peace and security in Georgia.  European integration will play a significant role in the reconciliation with Abkhaz and Ossetian communities.

Having a clear goal focused on the process of European integration is extremely important. That proved to be the case with the successful signing of the Association Agreement and achieving the visa-free regime through an all-of-government approach that accelerated the reform process in Georgia. The Georgian Dream has already set a new time-frame for bringing Georgia to an even higher level of European integration while promoting a faster pace for required reforms. This is an ambitious plan, but that’s the only right way to the future.