According to the Azerbaijani Defense Ministry, during the meeting in an expanded format, Minister Hasanov noted that strategic partnership between Georgia and Azerbaijan “is at a high level.” This, Hasanov told, not only benefits two neighboring countries but also contributes to the regional security.

Met with my colleague Col.Gen. Zakir Hasanov.
Georgia and Azerbaijan enjoy years of stable and consistent defence cooperation.
It is important that this year, Georgia will host trilateral defence ministerial with Azerbaijan & Turkey. pic.twitter.com/e2vA0HJTsf

On his part, Irakli Garibashvili stated that Georgia and Azerbaijan “enjoy years of stable and consistent defense cooperation.” “It is important that this year, Georgia will host trilateral defense ministerial with Azerbaijan and Turkey,” Garibashvili tweeted.

Earlier yesterday, Garibashvili held a meeting with Azerbaijani President Ilham Aliyev, where they discussed importance of stability in the region, strategic partnership between Georgia and Azerbaijan as well as jointly implemented projects.

Following the high-level meeting, Aliyev’s press office reported that the Azerbaijani and Georgian leaders hailed “bilateral relations” in various fields, including defense. They also emphasized the importance of energy projects carried out jointly by the two countries, as well as the “significance of the successful realization” of the Southern Gas Corridor. Minister Garibashvili put an emphasis on the good neighborly relations and trust-based strategic partnership between Georgia and Azerbaijan.

Hold my first meeting in Azerbaijan with the President Ilham Aliev. Emphasized the good neighborhood relations and trust-based strategic partnership between Georgia and #Azerbaijan pic.twitter.com/DO1fTvBiUH 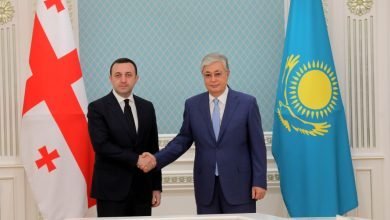