The European Union Delegation to Georgia in agreement with EU Heads of Mission stated on August 20 that “the erection of fences” by the Moscow-backed officials of Tskhinvali Region/South Ossetia in the vicinity of Gugutiantkari village “hinders freedom of movement and will deprive people from the local area from accessing orchards and water resources.”

“It is crucial that this work is stopped and that all relevant actors make active use of the existing mechanisms for communication – the Hotline and the Ergneti Incident Prevention and Response Mechanism format,” the statement reads.

The EU “remains engaged and involved in stabilization and conflict resolution efforts in Georgia,” including by continuing its engagements as co-chair in the Geneva International Discussions, the efforts of the European Union Special Representative for the South Caucasus and the crisis in Georgia (EUSR), and the continued presence on the ground of the EU Monitoring Mission (EUMM).

“The European Union will continue to support the sovereignty and territorial integrity of Georgia within its internationally recognized borders,” the EU Delegation stated.

Russian occupation forces started construction of new iron fences in the village of Gugutiantkari of the Gori Municipality, near the occupation line with Tskhinvali Region on the eleventh anniversary of the Russo-Georgia war on August 7.

Georgian officials have condemned “borderization” calling on the international community for support. Ambassadors of Estonia, Austria, Bulgaria, Latvia, Israel and Japan, as well as the Acting Ambassadors of the United States and Ukraine visited Gugutiantkari last week to study the situation on ground.

A number of world leaders, including the President of Estonia Kersti Kaljulaid, Foreign Minister of Lithuania Linas Linkevicius and Foreign Ministry of Poland have also condemned “borderization” in Georgia. 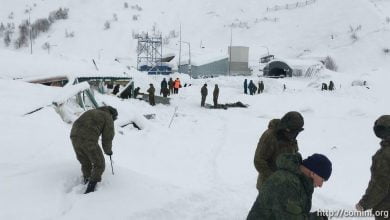