“Congratulations to the people of Ukraine on holding free and fair elections!” Prime Minister Mamuka Bakhtadze wrote in his Twitter post.

“I strongly believe that successful elections will further advance Ukraine’s democracy, reforms and progress on European Union integration path as well as strengthen ties between our friendly nations,” he added.

Congratulations to the people of #Ukraine on holding free & fair elections! I strongly believe that successful elections will further advance Ukraine’s democracy, reforms & progress on #EU integration path as well as strengthen ties between our friendly nations

“I believe, the bilateral relations and the Parliamentary cooperation between our countries will be more productive and active after the Elections,” Speaker Talakvadze added.

Early parliamentary elections were held in Ukraine on July 21, with President Volodymyr Zelensky’s Servant of the People party receiving  43.17% of votes (according to the 99.55% of votes counted so far). The party is projecting historical outright majority in parliament.

Overall, 17 out of the total of 22 parties that ran in elections, could not clear the 5% threshold required to get into parliament through the proportional list, including Georgia’s ex-President Mikheil Saakashvili’s Movement of New Forces (0.46% of votes).

NATO Says Russia Has No Right to Control Neighbors 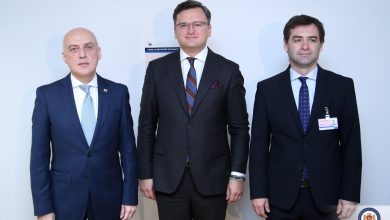