The latest installment of the traditional Georgian political drama has unfolded on June 20-21 in front of the Georgian Parliament, as the police charged protesters, malcontent with the ruling political team getting chummy with Russian MPs.

The “Rustaveli Avenue Politics” to borrow the term coined by the acclaimed Georgian political commentator Ghia Nodia, have lost nothing of their charge since 1989, when the Soviet troops assaulted the peaceful demonstration, killing 20. As then, civic mobilization triggered by violence threatens stability of the established regime.

But at least one element is novel: wide use of social media to gain the upper hand in a game of political escalation. At least as much of confrontation is taking place on Facebook – Georgia’s platform of choice – as on Rustaveli Avenue. And its outcomes are just as crucial as the symbolic pressure applied by protesters amassed in front of the Parliament.

Of Elves and Trolls

Spontaneous protest movement that filled Tbilisi’s main thoroughfare on 20 June and keeps the pressure on for the 27th day already, is largely mobilized via social media.

Georgia’s diverse internet media provide constant coverage and support to the ongoing protests and in general, to the street politics taking place in Tbilisi and elsewhere in Georgia.

The phenomenon of civic mobilization via social networks has been spreading. Some might recall White Noise Movement, Khorava street murder case demonstrations and many more recent protests. Social networks’ growing role in mobilizing Georgians, especially the youths, was noticeable since at least 2011-2012.

Facebook mobilized several thousand Georgian students and their supporters appalled by the release of prison scandal videos back in September 2012, a few days before Georgia’s first peaceful transfer of power through elections took place.

But just as civic activists have mastered Facebook, so did the government learn to counteract this pressure.

The last year witnessed a social media war of “likes” and “hahas” over then-PM Giorgi Kvirikashvili’s Facebook post. Kvirikashvili’s statement criticizing NGOs was countered by thousands of activists reacting “haha” to his post.

Curiously, the activists noticed that just as their sarcastic reactions, the “likes” in sympathy of the PMs post also started to grow. An analysis of the reactions showed, that the “likes” came from Pakistani, Indian, Bangladeshi and Vietnamese Facebook “bots” – automated fake accounts whose reactions can be purchased. Someone – PMs party of – worse – the government was buying services to counter-act activist pressure on social media.

The story had its continuation. In March 2019, the country’s main opposition TV channel Rustavi 2 ran a a story, claiming Koka Kandiashvili, ex-communications department head at PM’s office, has been running a Facebook troll attack against TBC bank from an office building on Tbilisi’s central 12, Rustaveli ave. building. The channel claimed this building housed a pro-governmental “troll factory” – an office which employs people to wage social media wars. Kandiashvili vociferously denied the claims.

The issue of (pro-governmental) trolls, bots and their impact on Georgia’s political life is becoming a matter of a concern. Mud-slinging operations to slander opponents via media have been used by the Georgian Dream party for long time. Several times, videos of private, sexual life have showed up on YouTube to slander opponents, especially potential or actual defectors from the ruling party. But a planned, coordinated use of social media to rally supporters and counter opponents is relatively new in Georgia.

Georgian watchdogs have monitored closely the recent surge of “trolls” to counter anti-occupation protests. They say to discredit the recent protests, the government deployed a multi-pronged strategy.

Recent study by Media Development Foundation, local media watchdog, revealed 32 pro-government trolls that were actively countering ongoing anti-occupation protests over the past weeks. Most of the trolls are aggressive, MDF study claims, also noting, that some of them were active before the protests too, engaged in campaigns to discredit political opponents, CSOs and TBC Bank.

Earlier report by ISFED, another watchdog, noted that since the police has dispersed the demonstration on June 20-21, triggering even wider protests, the mud-slinging pages were activated. They dovetail with and promote government message, putting the blame on protestors for violently attacking the police.

At the same time, ISFED report states, sponsored posts almost never disseminate any visual content that would depict use and abuse of force by riot police.

Worryingly the political figures utter the messages that are similar – almost word by word – by the ones tested by trolls earlier. In an attempt to justify the police actions and concealing the disproportionate use of force by the Ministry of Interior Kakha Kaladze, Tbilisi mayor and Georgian Dream’s general secretary said “dispersing the demonstration was neither planned, nor it was carried out, this was rather an action to repel an attack”.

It has been impossible to pin the blame for these campaigns directly on the government but the fingerprint of the ruling party spin-doctors is evident by circumstantial evidence.

Facebook page “Ver dabrundebian” (in Georgian They won’t be able to return – meaning that the previous administration, the United National Movement (UNM) won’t be back to power) is among those Facebook pages that actively shares homophobic content. The same page has been consistently supporting the Georgian Dream in previous elections, or in political debates – especially against UNM. The site has portrayed anti-occupation protests as a “gay revolution” in an attempt to discredit activists and opposition in a highly conservative Georgian society where homophobic sentiments run strong.

To make the case for Interior Minister Gakharia remaining on his position, the pro-government Facebook pages emphasized that LGBT activists were the (only) ones to demand Gakharia’s resignation.

Similarly, they portrayed hens – a hate-term for gay men – being the ones calling for release of UNM MP Melia (his last name means “fox” in Georgian). MP Melia’s immunity was lifted by the GD-dominated parliament after the prosecution said he was orchestrating an attack on parliament on the night of 20 June. He was not sentenced to pretrial detention by the court.

How Should the State Act Responsibly?

“South Caucasus Media Conference – “Fake news”, disinformation and freedom of the media” that was organized by the Office of the OSCE Representative on Freedom of the Media in Tbilisi in 2017 noted that “journalism in the South Caucasus today faces numerous challenges
related to the growing prevalence of disinformation (sometimes referred
to as “false” or “fake news”) and propaganda in legacy and social media,
fueled by both State and non-State actors.”

As the conference recommendation reads “state mandated blocking of entire websites, IP addresses or network protocols is an extreme measure which can only be justified where it is provided by law and is necessary to protect internationally recognized human rights or legitimate public interests”.

However, experts were clear on recommending that “State actors should not make, sponsor, encourage or further disseminate statements which they know or reasonably should know to be disinformation or propaganda. “

Premonition of the Things to Come

With the 2020 parliamentary elections fast approaching, aggressive use of social media is bound to expand.

The Presidential campaign was particularly nasty and polarized – The ODIHR Election Observation Mission noted “a widespread use of aggressive and violent rhetoric on TV programmes and social media, and during demonstrations as well as in individual statements by many high-ranking party members and public officials”.

Since social media is even more unregulated, the polarization and hate speech are bound to expand.

The trend is likely to be further augmented by the use of “natural threshold” will encourage fringe groups to aggressively mobilize supporters. Their voices, hateful and aggressive, have already been loudly heard in mobilization against Tbilisi Pride. 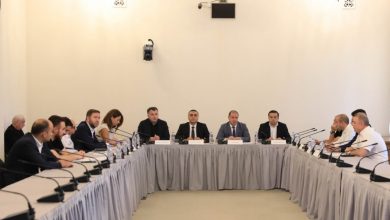