Heads of State and Government of the 29 member nations of the North Atlantic Alliance adopted yesterday the Brussels Summit Declaration, reiterating among others the decision made at the 2008 Bucharest Summit “that Georgia will become a member of the Alliance, with MAP as an integral part of the process.”

The Allied leaders recognize “the significant progress on reforms which Georgia has made and must continue, which are helping Georgia, an aspirant country, progress in its preparations towards membership, and which strengthen Georgia’s defense and interoperability capabilities with the Alliance.”

The declaration further underscores that “Georgia’s relationship with the Alliance contains all the practical tools to prepare for eventual membership,” and that the Alliance stands ready to enhance its support further, including in the areas of counter-mobility, training and exercises, and secure communications.

“These efforts, along with Georgia’s participation in EU-led operations, demonstrate Georgia’s commitment and capability to contribute to Euro-Atlantic security,” the document says, adding that NATO leaders “highly appreciate Georgia’s significant and steadfast contributions” to the NATO Response Force and the Resolute Support mission.

The NATO leaders also call on Moscow to reverse its recognition of Abkhazia and South Ossetia regions and implement the EU-mediated 12 August 2008 ceasefire, “particularly the withdrawal of Russian forces from the territory of Georgia; to end its militarization of these regions; and to stop the construction of border-like obstacles.” 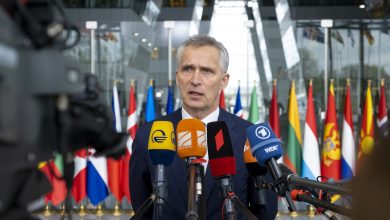