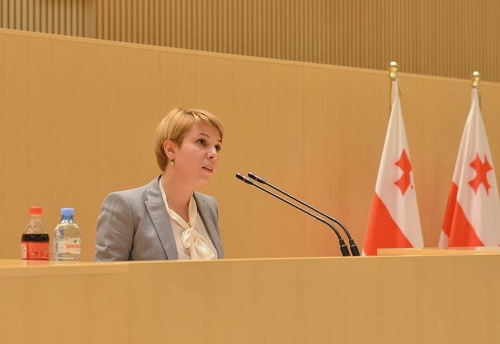 On November 30, the Parliament of Georgia confirmed with 96 votes to 5 Nino Lomjaria as new Public Defender for a five-year term.

Lomjaria, who previously served as deputy head of the State Audit Office, was nominated by the Georgian Dream parliamentary majority following consultations with civil society organizations. Lomjaria’s nomination was backed by a group of 13 non-governmental organizations.

The opposition United National Movement voted in favor of Nino Lomjaria, while the European Georgia parliamentary minority did not take part in the vote, saying the candidate selection process was held “behind closed doors.”

Two candidates for Public Defender appeared before the lawmakers. The Parliament heard Nino Lomjaria on November 29 and journalist Giorgi Popkhadze, who was nominated by the opposition Alliance of Patriots, on November 30. The latter was endorsed by 20 votes only, with 27 voting against.

In her remarks at the plenary sitting on November 29, Nino Lomjaria thanked the ruling majority for selecting the ombudsman’s candidacy through consultations with civil society organizations, and also noted that she feels full responsibility for the support received from the CSOs and the political parties.

“The Public Defender should be the voice of those social groups, who need the support most and whose voice is not heard loud enough,” Lomjaria told the lawmakers, adding that in her new capacity she would focus on the needs of the socially vulnerable, elderly, homeless, disabled, women and children, as well as the people with mental illness.

Parliamentary Chairman Irakli Kobakhidze, who presided over the plenary sitting on November 30, congratulated Nino Lomjaria on her election to “a very high position,” and expressed hope that the Parliament and the Public Defender’s office would establish “productive” cooperation.

President Giorgi Margvelashvili congratulated Lomjaria as well, saying the Public Defender’s office “is one of the key constitutional institutions” in Georgia, “which still faces a lot of challenges in terms of human rights and freedoms.”

Nino Lomjaria served as the Deputy Head of the State Audit Office from November 2016 to October 2017. Earlier, she was the head of Georgia’s largest election monitoring group, the International Society for Fair Elections and Democracy (ISFED).

The five-year term of Ucha Nanuashvili, incumbent Public Defender, expires on December 7. Nino Lomjaria will take the office on December 8.