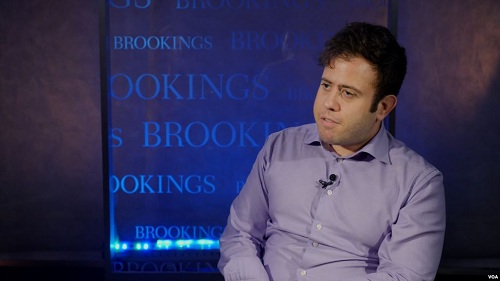 Jamie Kirchick, a fellow at the Brookings Institution. Photo: VOA

Jamie Kirchick, a fellow at the Brookings Institution, is an Author of “The End of Europe: Dictators, Demagogues, and the Coming Dark Age.” Voice of America’s Ani Chkhikvadze set down with Jamie Kirchick to speak about the Russo-Georgian War, the future of the NATO and the European Union.

This year marks nine years since 2008 August War. Russia continues to violate the ceasefire agreement. Moscow carries on the so called “borderization process,” building barb-wired fences in de facto Abkhazia after South Ossetia. What lessons did we learn from the 2008 War?

I think we have learned a lot, if you look back at last nine years, a lot of the problems that we have with Russia stem or could have been predicted, or seen through the 2008 War. Putin gave a speech in Munich in 2007, a very anti-American and bombastic speech. Next year he invades Georgia and pays no penalty for that whatsoever. The Obama administration comes in, six months after the invasion we have the announcement of the “Reset,”, and then increasingly worsened relations and more aggressive Russia; Russia that is spending more on its defense and putting more efforts in its propaganda instruments. Then you have the Ukrainian War and the intervention in the American political system.

I think many people have to look back and see the Georgian experience, being one of the first examples of Russia’s new assertiveness.

Vice-President Pence, during his visits to Eastern Europe, in Georgia and in Ukraine, promised an open door for the NATO. However, President Trump had earlier called the organization “obsolete,” only later to withdraw his statement. Do you think it is possible, under the current U.S. administration, that we see the United States returning to lobby the expansion of NATO?

I do not see that happening. It just does not seem that willpower is there, certainly not with this President. However, there are people in the administration that may differ from the President on that perspective and you saw what Mike Pence had to say. He seems to have a message completely different from the President. It is very complicated and difficult right now in Washington to read a coherent policy.

Your book takes a gloomy look at the current affairs in Europe. You speak about the rise of nationalist populism and Russian resurgent regime. It is titled “The End of Europe.” Why?

It is the end of Europe as we have known it for the past 25 years – the place for peace and harmony, liberal democracy and economic security. And all these fronts, these ideals are being challenged. You have aggressive Russia that has annexed the territories violently, for the first time since World War II. We see the rise of nationalism and populism, and the far right and far left. If you look at the Labor Party in the UK, they are in control of hard left – the anti-American left. Externally, you have American political situation that is completely new for us. It is new when you have the American government that seems uninterested in Europe (if not, actively hostile to European integration, at least in the form of President Trump himself). All these factors, combined, lead to a very dark picture.

So there is no hope?

No, there is hope. Absolutely. President Trump might not be President for much longer, who knows. Chancellor Merkel is going to win. Emanuel Macron is having difficulties after the first couple of months, but he might be able to move forward and succeed in implementing his economic reforms. The way Russians have behaved is waking many Europeans up and certainly, many Americans up to the threats that they pose. There is absolutely the hope. It is just a question of whether or not there are enough people willing to respond and rise up to the challenge.

The epigraph for your book is from Berthold Brecht’s “Caucasian Chalk Circle” — “The war is over, beware of the peace.” To a certain extent we can draw parallels from the Brecht’s play on geopolitical level. Geopolitically speaking, the ‘new’ Eastern Europe has become a bargaining chip on international stage, and often the analysts in the West argue for the balance of power and spheres of influence, ignoring the self-determination of those people living on these territories. What do you think the U.S. position should be towards these countries?

Policy should be what it has always been, that these countries have a right to make their own decision and choices when it comes to security alliances. They have the right to make a choice when it comes to political organizations, whether it is joining NATO or joining the EU, or moving wherever direction they want. Countries have that right, and this is not something that only the United States believes. Russia has signed all sorts of agreements that commit Russia to respecting these rights, from the Charter of Paris to the Helsinki Agreement to the Budapest Memorandum. There is a whole line of these agreements where Russia, at least in writing, has said that it respects the right of the countries to make sovereign decisions. However, in practice Russia does not behave that way.

The United States needs to uphold this principle, because it is really one of the most fundamental principles of the international relations. Independent countries should be free to design their foreign policy as far as it does not threaten anyone, and I do not think that the decisions made by countries like Georgia, Romania or Baltic states are threatening Russia. The West in not threatening Russia, in any way, whether it is territorial or economic sphere. In fact, if Russia had more positive and less antagonistic relationship with the West, it would have been better for Russia as a country. Russians would be richer and happier.

To touch upon the Eastern Partnership, and Europe’s eastern flank. Some argue that the internal exhaustion and challenges are making Europeans doubt themselves. Therefore any further enlargement of the union might present an obstacle as population grows dissatisfied with the Brussels’ politics. What do you think will happen to the Eastern Partnership and the enlargement agenda?

There have been worrying developments in the Eastern Partnership block in many, if not most of the Eastern Partnership countries that make it harder for them to be accepted in the EU, in terms of democracy and other factors in the acqui communautaire (that is required to move forward with accession process). It is not a very optimistic picture for the next few years.

Let’s move to Georgia. As you know, the main opposition party has split between two forces: the UNM and the European Georgia. Some connect the split with the role of Mikheil Saakashvili. Recently, Saakashvili lost his Ukrainian citizenship. How do you assess his role for Georgia’s future and for Ukraine?

I think he played a very important and largely positive role in the Georgian history, in reducing corruption, in modernizing the economy and in driving the country closer to the West. I think he played his role and it is time for him to move on. It is hard for me to see how he continues to play a positive role in the Georgian politics. What happened in Ukraine appears to be politically motivated on the part of the Poroshenko government. It is not a very good sign for democracy to have a government, for purely political reasons, violate rights of one citizen and strip him of citizenship.