The Russian Ministry of Foreign Affairs expressed concern over the U.S.-funded medical research facility in Tbilisi in its April 29 statement criticizing America’s compliance to the Biological Weapons Convention (BWC).

The Russian comments were issued in response to the U.S. State Department’s 2017 Report on Adherence to and Compliance with Arms Control, Nonproliferation and Disarmament Agreements and Commitments.

The MFA said in the statement that questions on American compliance remain unanswered, causing “growing concern” in Moscow, and that American conduct is forcing Russia to “think about the real, not publically declared, military-biological agenda of the the United States.”

“We are concerned over the consistent development of the U.S. military-biological infrastructure along the perimeter of the Russian borders. Significant strengthening the U.S. Army Medical Research Directorate in Georgia (Alekseevka village) is particularly disturbing,” the statement reads.

The Ministry was referring to the U.S. Army Medical Research Directorate – Georgia (USAMRD-G), part of the Richard Lugar Center for Public Health Research, U.S.-funded biological research laboratory in Tbilisi outskirts. Its mission, according to the U.S. Army Medical Research and Materiel Command, is the identification and mitigation of medical threats and combating endemic disease threats in cooperation with the Government of Georgia, which it is helping to build “capacity for a self-sustaining medical research organization.”

The Lugar Center is a joint Georgian and American facility. According to Georgia’s National Center for Disease Control and Public Health (NCDC), the Center “is top-tiered institution in NCDC’s laboratory network and serves as a reference laboratory of Georgia’s public health system.” The NCDC website reports that the Lugar Center is currently being entirely transferred to the Government of Georgia, which will take full responsibility for the Center’s funding and operation from 2018.

Russia has a history of expressing concern over the presence of the Lugar Center. In July 2013, Gennady Onishchenko, head of Russia’s state consumer protection agency RosPotrebNadzor, said that the laboratory represented “a powerful offensive potential,” and was in violation of the BWC. In June 2015, Russian Foreign Ministry accused American and Georgian governments of “trying to cover the true contents and direction” of USAMRD-G operating in the Lugar Center. In February 2016 Onishchenko, said that the Lugar Center could infect mosquitoes with Zika virus.

The Lugar Center is widely featured in anti-Western messaging in Georgia.

The MFA statement also reacted to the criticism in the State Department report regarding Russia’s compliance with the Vienna Document on Confidence and Security-building Measures and the Treaty on Open Skies (OST).

The State Department Report notes that Russia failed to provide information on its military forces in Abkhazia and Tskhinvali regions as required by the Vienna Document. It also stated that since “Abkhazia and South Ossetia are within the internationally recognized borders of Georgia and are considered by all other participating States to be part of Georgia,” they are part of the Vienna Document’s zone of application.

The Report also notes that Russia failed to adhere to the OST, which allows unarmed aerial observation flights by treaty participant states over the territory of other treaty participant states, by refusing “access in a ten-kilometer corridor along its border with the Georgian regions of South Ossetia and Abkhazia since 2010.” The State Department Report says that since both regions are internationally recognized part of Georgia, “there is no basis within the Treaty to exclude observation flights from within ten kilometers of any portion of the Russia-Georgia border.”

In its response, the Russian MID said that Abkhazia and Tskhinvali regions were “sovereign states” that were not parties of either of the two treaties, or of the OSCE, and thus, not bound by the obligations. 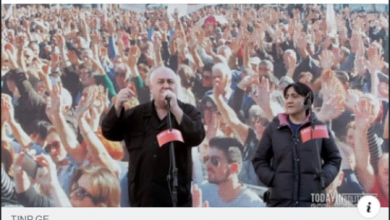 ISFED Speaks of Inauthentic Pro-Alliance of Patriots Campaign on Facebook