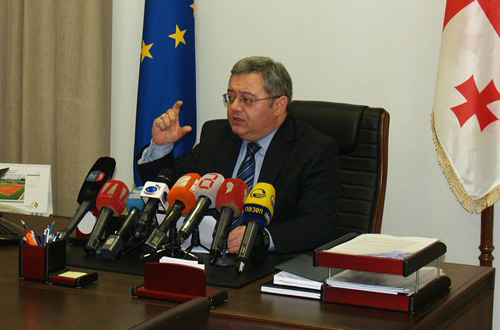 Although an agreement was reached on “all the constitutional issues” in talks over power-sharing arrangement, disagreement on modalities of intended amnesty for officials from the previous authorities failed to produce final accord, Parliamentary Chairman Davit Usupashvili said on February 20.

In a televised statement Usupashvili laid out in details proposals and counter-proposals which were put forth by the both sides in the process of negotiations.

Few minutes later parliamentary minority leader, MP Davit Bakradze, who was UNM’s negotiator, also made a statement, confirming that the final agreement was not possible because of differences on the scope of amnesty.

“As a result of intensive work an agreement was reached on all the issues related to constitution,” Usupashvili said. “But implementation of this agreement was not made possible because of a disagreement on an amnesty for public servants, which was put forth by the United National Movement as a last-minute proposal.”

“I want to thank those members of the parliamentary minority who were involved in the negotiations; they showed professionalism and honesty; but, regrettably, no result was achieved. I hope that our work will be more productive in the future,” Usupashvili said before laying out details of the negotiating process.

He said that initially Georgian Dream put forth in December a draft of constitutional amendment envisaging limiting presidential powers by depriving him the right to sack the sitting government and to appoint new one without Parliament’s approval.

UNM put forth their counter proposals, among them: increasing threshold for passing any new constitutional amendment in the future from current two-third (100 MPs) majority to three-fourth (113 MPs) majority; amending constitution to make pro-western foreign policy course binding, as well as keeping Parliament’s location in Kutaisi. The UNM has agreed to enforce part of new constitutional clauses to limit presidential powers earlier than scheduled in late 2013.

Usupashvili said that in the process of negotiations, as of February 15, the Georgian Dream agreed on following points, which were pushed for by UNM:

On the issue of making pro-western course constitutionally guaranteed, Usupashvili said: “We considered that the wording proposed by them [UNM] was not optimal, but in order to avoid any speculation on this issue the Prime Minister gave them full blank check: ‘Bring any text you want, but only under one condition: the text should be agreed with representatives from NATO and the European Union in order not to harm the process’.”

After the agreement on all these issues was achieved, Usupashvili said, the UNM proposed on February 16 “additional precondition – unconditional and full amnesty for all the public officials from the President to employees of provincial municipalities and applying the amnesty to all the wrongdoings, except of violent crimes.”

Usupashvili said that in response GD put forth on February 17 its proposal offering “unconditional and full amnesty on low and mid-level public servants for all the wrongdoings, except of violent crimes, committed before October 1, 2012.”

In addition GD also agreed on “partial amnesty” for high level public officials, in particular for those about 1,500 officials who are in the list of officials in the law on conflict of interests; the list, among others, include: President; parliamentarians; ministers and their deputies; heads of departments and units of ministries; governors; heads of municipal agencies; judges; members of High Council of Justice; prosecutors and others.

Usupashvili said that proposed “partial amnesty” for these officials envisaged that in case of admitting wrongdoing, they would have been exempted from any criminal prosecution and the only measure applied to them would have been banning them from taking public office for 5 years.

“So our proposal was full amnesty, except of violent crimes, for every official, except of high level public servants and partial amnesty for high level officials,” Usupashvili said.

“This proposal was declined by the United National Movement,” he said.

Usupashvili said that in response UNM offered on February 18 a proposal for “full amnesty for everyone, except of President, ministers and parliamentarians, for wrongdoings, except of violent crimes, committed before October 1, 2012.”

Difference between proposals of GD and UNM, Usupashvili said, was “huge”, as UNM wanted full amnesty for mid-level and many other officials as well.

“We cannot agree on that, because it would be wrong, unfair and it would mean retracting our pre-election promise to voters; we won’t be able to give an answer to the people on a question: why do we pardon everyone, except of President, parliamentarians and ministers,” Usupashvili said.

After laying out these details of negotiations, Usupashvili then spelled out GD’s moves it was now planning to undertake.

Usupashvili said that within two weeks GD would anyway initiate a bill on amnesty for officials based on principles proposed by GD on February 17 – that is full amnesty for low and mid-level public servants and partial amnesty for high level officials.

Second, GD will put on vote draft of constitutional amendment on depriving president of his powers to sack the government and appoint new one without Parliament’s approval if needed “depending on political situation.”

Third, GD will not put on vote draft of constitutional amendment on Parliament’s location before the end of the spring session of the Parliament.

Fourth, GD will continue efforts to reach an agreement with UNM on GD-proposed 14-point inter-faction document on foreign policy, but regardless of outcome of these efforts, GD will put on vote this document as a parliamentary resolution before March 15.

Fifth, a state commission to prepare broad constitutional reform package will be established, which will also work on “reflecting country’s European choice in the constitution.” The commission, according to Usupashvili, will unite representatives from ‘qualified’ political parties (these are the parties which have cleared, separately or together with others in an electoral bloc, a 4% threshold in parliamentary elections and a 3% threshold in local self-government elections), as well as civil society representatives.

Sixth, an inter-faction group on improving election code will start intensive work from March 1; political parties, which have no members in the Parliament, as well as representatives of civil society and international organizations, will also be invited to take part in the work of this group.

Seventh, GD will develop and present to the public before March 1 a comprehensive plan on the following four issues: protection of public order at events in which president and other opposition representatives are participating; providing firm protection of due process and rights of those facing criminal prosecution; protection of rights of officials from local self-government bodies (all these represent issues of concern often raised by UNM); providing timely and complete information to the international community on criminal proceedings against former or sitting officials.

“We are not suspending dialogue with the opposition,” Usupashvili said. “But at the same time we cannot limit ourselves only with fruitless dialogue. Opposition can afford dragging out the process with groundless whims and by putting forth new conditions. It is the obligation of the authorities to do the job and at the same time to be ready for a dialogue.”

He also reiterated that while pursuing above listed planned actions, GD was also ready to engage in dialogue with the UNM to reach “broad political accord.” 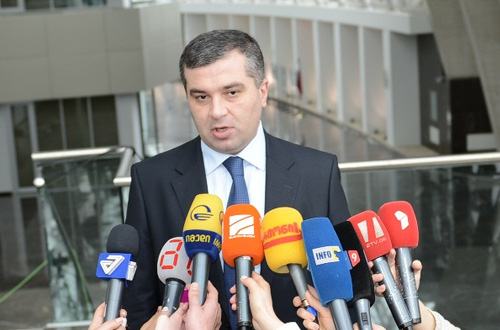 Bakradze, however, said that the issue of, as he put it, “need for stopping political persecution” was not put forth by UNM as a last-minute proposal; he said that it was always raised by UNM throughout the entire process of negotiations.

“As of now about 15,000 people have been questioned [by law enforcement agencies] just because they are affiliated in some form with the United National Movement,” Bakradze said, stressing that he did not mean the cases involving allegations of violent crimes.

He said that UNM was offering to apply amnesty to, as he put it, “thousands” of former or acting officials, but not to top level former or incumbent officials. “We are not asking for immunity for the leadership and for ourselves,” Bakradze said, adding that GD-offered proposal was not applying to large number of public servants.

Like Usupashvili, Bakradze too reiterated UNM’s readiness to continue talks, including on those concrete proposals which were laid out by the parliamentary speaker in his statement.