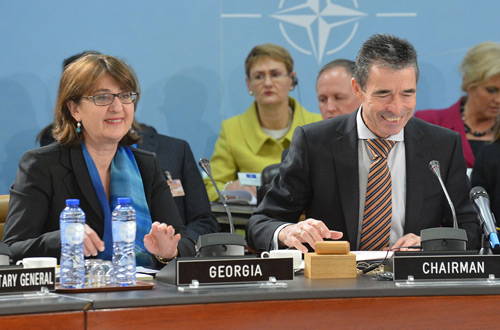 After the democratic parliamentary elections in October, the “challenge now is to maintain momentum”, to ensure smooth cohabitation between the President and government and “to ensure that Georgia stays on the path of democratic reforms,” NATO Secretary General Anders Fogh Rasmussen said.

Speaking at a news conference following a meeting of NATO-Georgia Commission on the foreign ministerial level on December 5, Rasmussen said that the Alliance recognized Georgia’s strong reform record.

“But we also recognize that there is still more work to be done, especially with respect to reforming the judiciary and strengthening the rule of law and media freedom and transparency,” Rasmussen said. “We look forward to a still stronger and closer relationship in 2013 and beyond.”

Before the NATO-Georgia Commission, Rasmussen had a bilateral meeting with Georgian Foreign Minister Maia Panjikidze earlier on December 5.

Less than a month ago, the NATO Secretary General said on November 12, that he was “extremely concerned” about the arrests of, as he put it, “political opponents” in Georgia.

Asked during a press conference on December 5 whether he had observed positive developments in this regard in Georgia since his November 12 remarks, Rasmussen responded that the issue of “recent arrests of representatives of the former administration” was discussed at the NATO-Georgia Commission meeting.

“We have stressed that NATO has no intention whatsoever to interfere with these legal processes. But we have added to that, that it is of utmost importance that the authorities in Georgia respect fully the fundamental principles of the rule of law and people, who are arrested, also are guaranteed a due process,” Rasmussen said.

“We have stressed that it’s of utmost importance that these legal cases are not perceived as political persecution. Even the perception is here very important. So, in conclusion, we have expressed our appreciation of the reforms that have been carried through in Georgia; we also stressed that there is still work to do,” the NATO Secretary General added.

At the same press conference he was then again asked about the same issues, in particular whether his comments meant that the NATO had no concerns about the recent arrests any more.

Rasmussen responded: “We have expressed our concerns also today, but we got assurance from the Foreign Minister, as I have got from the Prime Minister [Bidzina Ivanishvili] in previous meetings, that the government will not interfere in the judiciary, they will ensure that people will get due process, they will ensure full respect for the principle of rule of law.”

“So we’ve got assurances and so far so good; but of course we will now follow the development closely,” Rasmussen added.

Asked whether he thought that cohabitation would work in Georgia, the NATO Secretary General responded that “it is not easy”, but noted that NATO foreign ministers welcomed an agreement between the government and the President on appointment of new Chief of Joint Staff of the Armed Forces.

He said it was “a very important signal” and “at least promising”.

“It is a clear indication that parties involved try to move forward to ensure smooth cohabitation,” Rasmussen said.

“Let me stress that in today’s meeting we have recognized… the very successful conduct of parliamentary elections on the 1st of October. Georgia has, in that respect, passed a very important test,” he said.

“We now look forward to seeing a smooth cohabitation between the new government and the President and we look forward to free, fair and transparent presidential elections next year,” Rasmussen said.

U.S. Secretary of State Hillary Clinton said at a news conference in Brussels on December 5 that NATO-Georgia Commission discussed how Georgia "can keep making progress toward NATO, especially by continuing to strengthen democratic institutions, reform their armed forces, and contribute to our common security."

She also said that at NATO-Russia Council on December 4, the foreign ministers discussed areas of cooperation, as well as they spoke "frankly about the areas of disagreement that continues to exist between NATO and Russia, including Georgia’s sovereignty and territorial integrity and the need for a political transition in Syria."